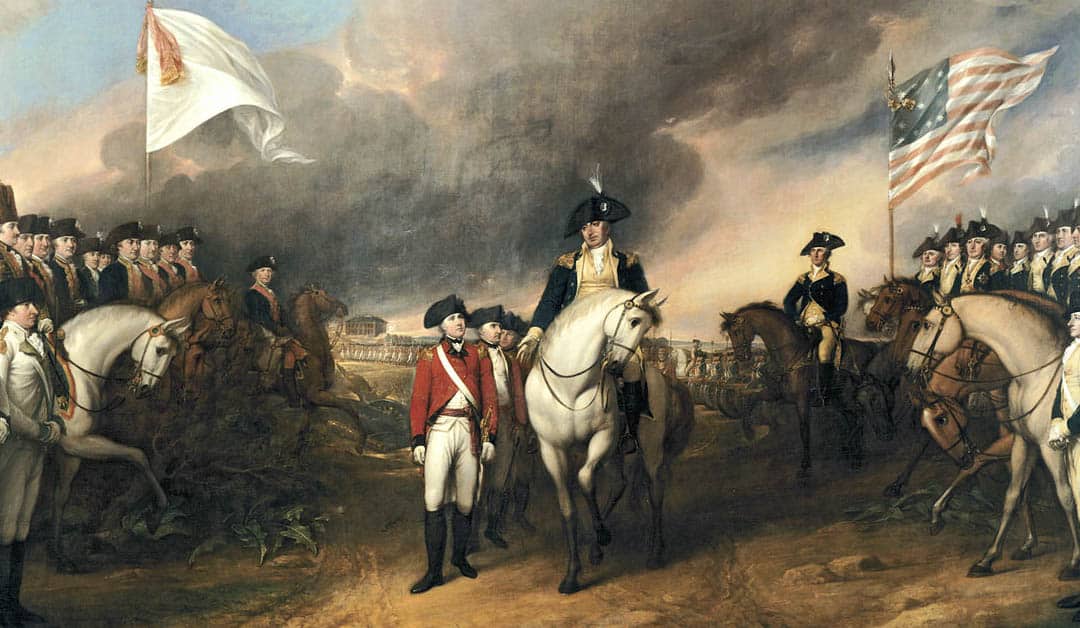 The Battle of Yorktown — also known as the Siege of Yorktown — took place from September 28, 1781, to October 19, 1781, in and around Yorktown, Virginia. It was the last major battle of the American Revolutionary War.

In the spring of 1780, the British had control of New York City and decided to focus on defeating the American forces in the South. Once the South was under control, the southern forces would march north, eliminate further resistance, and bring an end to the war.

The campaign started in May and the British successfully captured Charleston, South Carolina. General Charles Cornwallis was placed in command of the southern forces. From there, he systematically took control of South Carolina. On August 16, 1780, he crushed American forces under the command of General Horatio Gates at the Battle of Camden. American forces were scattered, although General Francis Marion gathered men and successfully attacked British supply lines.

From there, Cornwallis set his sights on North Carolina and prepared to invade. However, his forces, under the command of Major Patrick Ferguson were defeated at the Battle of Kings Mountain, primarily by the backwoods militia known as the Overmountain Men. It was a major turning point in the war, as Cornwallis was forced to abandon the invasion of North Carolina and move back to South Carolina.

After Gates was defeated, George Washington put Nathanael Greene in command of the Southern Department. Greene made a bold move and divided the army. Cornwallis responded by sending Lieutenant Colonel Banastre Tarleton and a portion of his forces after General Daniel Morgan. They met near Chesnee, South Carolina at the Battle of Cowpens. Morgan led his forces to a significant victory, which cost Cornwallis more men.

Cornwallis turned his attention to Greene and chased after him. They met near present-day Greensboro, North Carolina at the Battle of Guilford Court House. Although the British won the battle, they suffered heavy casualties. Cornwallis could not continue to pursue Greene and marched back to Wilmington, North Carolina, where the British supply base was, so his men could rest. By April, Cornwallis decided to turn his attention to Virginia.

Cornwallis Settles in at Yorktown

On May 10, Cornwallis entered Virginia and took command of all British forces there. Throughout the summer, he conducted raids throughout the state. On August 1, he settled in at Yorktown, which he planned to use as a base to resupply his army and continue his campaign in Virginia.

The Americans and French Move on Yorktown

When Washington found out Cornwallis was at Yorktown, he ordered American forces in the South to block land routes out of Yorktown. On August 14, Washinton learned there was a fleet of French ships under the command of Admiral de Grasse sailing to the Chesapeake Bay from the Caribbean. The French would be able to block the British escape to the sea. A week later, Washington marched south along with French forces led by General Comte de Rochambeau.

On September 5, the French fleet defeated the British Navy at the Battle of the Capes. The British ships were forced to sail back to New York and the French blockaded the Chesapeake Bay.

The Siege of Yorktown

On September 28, American and French forces arrived at Yorktown and started to bombard the city — the Siege of Yorktown was underway. Over the next three weeks, the allied forces slowly chipped away at British defenses. On October 14, American and French forces attacked strategic British positions outside of Yorktown. Lieutenant Colonel Wilhelm Graf von Zweibrücken led 400 men and took Redoubt Number Nine. Colonel Alexander Hamilton led another 400 troops and took Redoubt Number Ten.

The British attempted to sneak out of Yorktown on October 16 by crossing the York River. However, a storm blew in and the plan was ruined. They were forced to halt the operation. Cornwallis met with his officers, and they agree they have no option but to surrender.

The next day, Cornwallis sent a drummer out to the American lines. He was followed by an officer carrying a white flag. The officer carried a note from Cornwallis to Washington that said:

“Sir, I propose a cessation of hostilities for twenty-four hours, and that two officers may be appointed by each side, to meet at Mr. Moore’s house, to settle terms for the surrender of the posts of York and Gloucester.”

Over the course of the next 24 hours, Cornwallis and Washington traded notes that established the terms of the British surrender. On the 18th, representatives — one American officer (John Laurens), one French officer (Second Colonel Viscount de Noailles), and two British officers (Lieutenant Colonel Thomas Dundas and Major Alexander Ross) — met at Moore House outside of Yorktown to settle the final terms.

The British Surrender at Yorktown

On October 19, 1781, the Articles of Capitulation were signed. Cornwallis surrendered more than 7,000 officers and men. Cornwallis refused to attend the formal ceremony and sent General Charles O’Hara in his place. O’Hara offered the sword of surrender to Rochambeau, who refused and directed O’Hara to give it to Washington. Washington also refused and instructed O’Hara to give it to his second in command, Benjamin Lincoln. At that point, the British soldiers laid down their arms between the American and French armies.

Legend has it the British band played, “The World Turned Upside Down” during the surrender.

The Aftermath of the Surrender and the End of the War

Despite the surrender, the British still had more than 25,000 troops in America. Some sporadic and bitter fighting continued in the South for several months, but the victory at Yorktown was the last major engagement of the American Revolutionary War. The British did not have an army to send to America to replace the one Cornwallis surrendered. In March 1782, Parliament passed a resolution that said the war should not continue. In 1783, the Treaty of Paris was signed which officially ended the war.

Perhaps more important to those who fought for the Patriot Cause was the fact that Great Britain acknowledged the United States of America as a free, independent nation.

Overview of the Surrender at Yorktown