The Battle of Fort Sumter took place from April 12–13, 1861. It was the first battle of the Civil War and ended in a Confederate victory.

Summary of the Battle of Fort Sumter

As the Union started to dissolve, the seceding state governments began seizing federal property within their borders, including forts and arsenals. In South Carolina, Governor Francis Pickens tried to negotiate a peaceful takeover of Federal facilities in Charleston Harbor, including Fort Sumter. When Major Robert Anderson moved his men from Fort Moultrie into Fort Sumter, Pickens had the South Carolina militia build artillery batteries around Charleston Harbor that could fire on the fort and prevent Union supply ships from reaching it. After the Confederate States of America was formed, P.G.T. Beauregard was placed in command of Confederate forces laying siege to Fort Sumter. When President Lincoln announced he was sending three unarmed supply ships to Fort Sumter, the Confederates warned that it would be viewed as an act of aggression. Anderson and Beauregard negotiated the surrender of the fort, but could not agree to terms. As a result, Confederate artillery batteries opened fire on Fort Sumter at 4:30 a.m. on April 12. The Confederate batteries shelled the fort until the afternoon of April 13, when Anderson finally surrendered. Beauregard allowed the Union troops to leave the fort. Major Anderson carried the American flag that had flown over the fort with him when he left. As the first engagement of the Civil War, the Battle of Fort Sumter played an important role in the early days of the conflict. 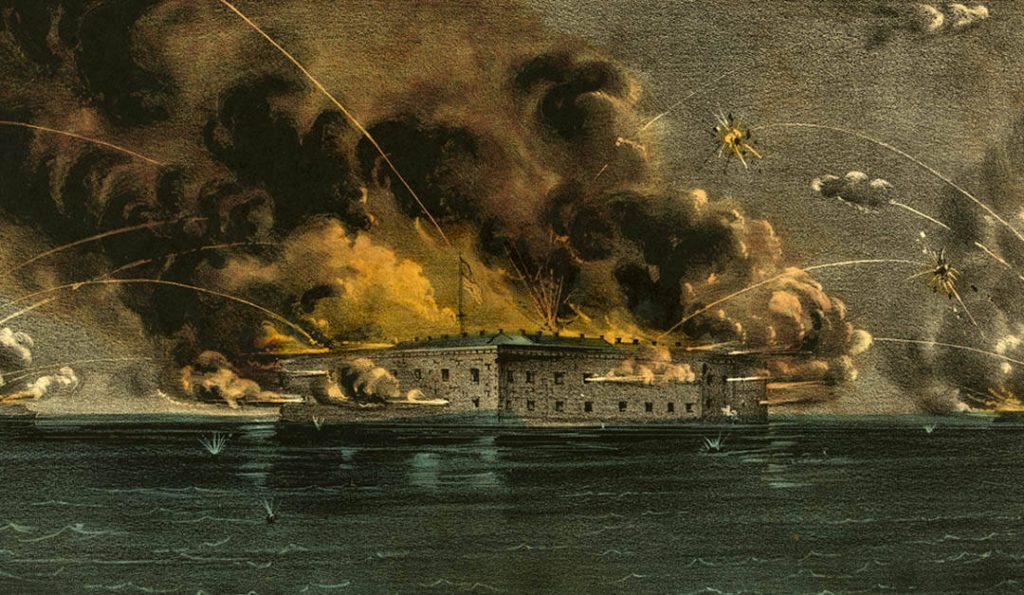 5 Things to Know About the Battle of Fort Sumter

Overview of the Battle of Fort Sumter

Election of Abraham Lincoln and the Secession Crisis

On November 6, 1860, American voters elected Republican Party candidate Abraham Lincoln as the sixteenth President of the United States of America. During the campaign, Lincoln stressed that he had no intention to interfere with the institution of slavery in states where it already existed. Still, he and the Republican Party platform denied “the authority of Congress, of a territorial legislature, or of any individuals, to give legal existence to the institution of slavery in any Territory of the United States.” Viewing Lincoln’s election as an impending threat to the South’s peculiar institution, the South Carolina legislature enacted an ordinance of secession on December 20, 1860. Within approximately two months, six other Southern states followed suit.

As the Union started to dissolve, the seceding state governments began seizing federal property within their borders, including forts and arsenals. South Carolina Governor Francis Pickens came under extreme pressure from his constituents to do something about four Federal properties within Charleston Harbor.

Hoping to negotiate a peaceful takeover of the Federal facilities in Charleston Harbor, Pickens dispatched envoys to Washington, DC, to meet with members of President James Buchanan’s administration after South Carolina seceded. While President Buchanan also wished to avoid bloodshed, he balked at handing over Federal property to South Carolina. As early as December 11, the War Department instructed Major Anderson that “… you are to hold possession of the forts in this harbor, and if attacked you are to defend yourself to the last extremity.”

As negotiations appeared to stall, Anderson decided that his position at Fort Moultrie was indefensible against a land attack by the South Carolina Militia. During the night of December 26, 1860, Anderson abandoned Fort Moultrie, spiking the guns before he left. Under the cover of darkness, he merged his command, comprising two companies of the First Artillery, plus the regimental band (a total of eighty-four officers and men) to the more formidable Fort Sumter. An outraged Pickens considered Anderson’s actions as a breach of faith. The next day, he ordered the South Carolina Militia to occupy the abandoned Castle Pinckney and Fort Moultrie. The militia quickly began erecting batteries around Charleston Harbor capable of reaching Fort Sumter with artillery fire. When Anderson refused to heed Pickens’s demands to abandon the fort, the governor resolved to besiege the Federals, rebuffing any attempts to provision or to reinforce the garrison. Pickens proved that he meant business on January 9, 1861, when his militia fired on the Star of the West, an unarmed merchant ship the Buchanan administration had dispatched to deliver supplies and reinforcements to Fort Sumter. Hit by two shells, the ship withdrew before delivering its cargo.

On February 4, 1861, delegates from seven Deep-South states, meeting at the Confederate Provisional Congress in Montgomery, Alabama, voted to form a union that would become the Confederate States of America. On February 8, the delegates adopted a provisional constitution. The next day, they selected former United States Senator and Secretary of War Jefferson Davis as provisional president of the newly formed government. One week later, on February 15, the Provisional Congress authorized Davis to occupy Fort Sumter by force if necessary. Davis then dispatched Brigadier General P. G. T. Beauregard, on March 3, to assume control of military affairs at Charleston. The next day, Abraham Lincoln assumed the office of President of the United States.

The day after his inauguration, Lincoln reviewed a message from Anderson, estimating that the garrison at Fort Sumter had only enough provisions to last through April 15. The president faced the first crisis of his new administration. The stalemate appeared to leave Lincoln two options; he could order Anderson to evacuate the fort, or he could try to reinforce the garrison and hold it by force. Southerners might view the former as a sign of weakness, while they might perceive the latter as a sign of aggression.

Not wishing to push more states towards leaving the Union, Lincoln conceived a stratagem to resolve his dilemma. On April 6, 1861, the president informed Governor Pickens that he intended to resupply the beleaguered garrison at Fort Sumter. Lincoln addressed Pickens rather than Beauregard or Davis because the United States did not recognize the legitimacy of the Confederate States of America. The president also informed Pickens that the federal government would not use force or attempt to enlarge the garrison at Fort Sumter unless the effort to resupply the fort met with armed resistance. Characterizing the expedition as a relief effort, as opposed to a military mission, Lincoln believed that Southern resistance would cast the Confederacy in the role of aggressor should hostilities erupt.

Anderson and Beauregard Reach an Impasse

On April 10, 1861, a second expedition to resupply Fort Sumter sailed from New York, New York. On the same day, after considerable debate within Davis’ cabinet, the Confederate president advised Beauregard to fire on any attempt to re-provision the fort. The next day, April 11, emissaries from Beauregard delivered a message to Anderson, demanding the surrender of Fort Sumter. Anderson refused.

Just after midnight on April 12, Beauregard dispatched another negotiating party to the fort. This time Anderson agreed to evacuate the facility by April 15, if his garrison did not receive supplies before then. Unwilling to accept Anderson’s proviso regarding supplies, Beauregard’s envoys ended negotiations at 3:20 a.m. and informed the major that Confederate batteries would begin shelling Fort Sumter in one hour.

At 4:30 a.m., April 12, 1861, from the beach near Fort Johnson, Captain George S. James’s battery of the South Carolina Artillery fired a mortar shot over Fort Sumter, signaling the other harbor batteries to begin their bombardment. The American Civil War had begun. Over the next thirty-four hours, the Confederates fired over 3,000 shells at the fort.

The Federals began returning fire at 7 a.m. on April 12, but they constrained the reply to approximately 1,000 rounds because of their limited number of shells and fuses. Captain Abner Doubleday, Anderson’s second in command, received the honor of firing the first shot from the fort. This photograph of the exterior of Fort Sumter was taken after Anderson and the Federal troops evacuated. Image Source: Library of Congress.

During the first day of the bombardment, wooden barracks inside the fort caught fire on three occasions, but Anderson’s men controlled the blazes. On the morning of April 13, a Confederate hotshot (a cannonball heated in a furnace before firing) started another fire that threatened to ignite the fort’s powder magazine.

At approximately 1 p.m., a shell splintered the staff flying the United States flag. When Colonel Louis Wigfall, a former United States senator, observed that the colors were no longer flying over the stronghold, he commandeered a small boat on Morris Island and rowed to the fort waving a white flag of truce to inquire if Anderson intended to surrender. By then the combination of bombing, blazes, and a shortage of provisions had rendered the garrison helpless, so Anderson expressed his willingness to negotiate terms. Although Wigfall had no authority to do so, he struck an agreement at 2 p.m. for the defenders to evacuate the fort. The Federals then raised a white flag over the fort as a sign for the shelling to stop. Upon seeing the white flag, Beauregard dispatched envoys to negotiate terms of surrender, unaware that Wigfall had already done so. Unwilling to accept the terms Wigfall had mediated Beauregard’s emissaries concluded a new set of terms to end the shelling and to have Union forces evacuate the fort.

Beauregard’s terms were generous. He detained none of Anderson’s men as prisoners, and when the Federals marched out of Fort Sumter on Sunday, April 14, 1861, Anderson carried with him the American flag that had flown over the facility. In addition, Beauregard allowed Anderson to perform a one-hundred-gun salute before evacuating the fort.

First Casualties of the Civil War

Unfortunately, during the ceremony a cannon misfired, instantly killing Private Daniel Hough and mortally wounding Private Edward Galloway, making them the first casualties of the American Civil War. Two other soldiers wounded during the explosion recovered from their wounds. Incredibly, there were no other casualties on either side during the battle.

Outcome of the Battle of Fort Sumter

The Confederates held Fort Sumter throughout most of the war until Major General William T. Sherman captured Charleston in February 1865. On April 14, 1865, Anderson (by then a brevet major general) returned to Fort Sumter to raise the Stars and Stripes over the stronghold he had evacuated earlier (four years to the day). Sadly, later that night, a bullet claimed one more victim of the epic struggle between North and South, when John Wilkes Booth assassinated President Lincoln in Washington, D.C.

Significance of the Battle of Fort Sumter

The Battle of Fort Sumter was important because the Civil War started when the first shot was fired, and the first casualties of the war occurred. The Confederate victory and subsequent occupation of the fort set the stage for the long, violent conflict that lasted for four years and cost hundreds of thousands of lives.

If you would like to learn more about the Battle of Fort Sumter, take a look at the following resources:

History of the Battle of Fort Sumter