The Boston Non-Importation Agreement was signed by Boston merchants and traders on August 1, 1768. The agreement established a trade boycott against British goods and products, in protest of the Townshend Acts.

Summary of the Boston Non-Importation Agreement of 1768

The Boston Non-Importation Agreement was a trade boycott of British goods that was implemented by merchants and traders in Boston to protest the passage of the Townshend Revenue Act. The agreement was initially signed on August 1, 1768, by most of the merchants and traders in Boston, and was similar to non-importation agreements that were implemented during the Stamp Act Crisis. Several major cities in Colonial America joined Boston and passed their own versions, including New York and Philadelphia. The Boston agreement was in place until 1770 when Parliament repealed the Townshend Revenue Act — except for the tax on tea.

The merchants and traders in the town of Boston, having taken into consideration the deplorable situation of the trade and the many difficulties it at present labours under on account of the scarcity of money, which is daily decreasing for want of the other remittances to discharge our debts in Great Britain, and the large sums collected by the officers of the customs for duties on goods imported; the heavy taxes levied to discharge the debts contracted by the government in the late war; the embarrassments and restrictions laid on the trade by the several late Acts of Parliament; together with the bad success of our cod fishery this season, and the discouraging prospect of the whale fishery, by which our principal sources of remittances are like to be greatly diminished, and we thereby rendered unable to pay the debts we owe the merchants in Great Britain, and to continue the importation of goods from thence:

We, the subscribers, in order to relieve the trade under those discouragements, to promote industry, frugality, and economy, and to discourage luxury and every kind of extravagance, do promise and engage to and with each other as follows:

That we will not send or import from Great Britain this fall, either on our own account, or on commission, any other goods than what are already ordered for the fall supply.

That we will not send for or import any kind of goods or merchandise from Great Britain, either on our own account, or on commissions, or any otherwise, from January 1, 1769, to January 1, 1770, except salt, coals, fish-hooks and lines, hemp, duck, bar lead and shot, wool-cards, and card-wire.

That we will not, from and after January 1, 1769, import into the province any tea, paper, glass, or painters’ colours, until the Acts imposing duties on these articles have been repealed.

In witness whereof, we have hereunto set our hands, this first day of August, 1768.

The Sons of Liberty Enforce the Boston Non-Importation Agreement

The Sons of Liberty took it upon themselves, as they did with other non-importation agreements, to enforce the agreement. A broadside was posted throughout the streets of Boston that informed violators of the agreement they would be publicly shamed. The broadside reads:

“The true Sons of Liberty And Supporters of the Non-Importation Agreement,

and will also support the Printers in any Thing the Committees shall desire them to print.

As a Warning to any one that shall affront as aforesaid, upon sure Information given, one of these Advertisements will be posted up at the Door or Dwelling-House of the Offender.”

Punishment for William Jackson and Other Violators

During the winter of 1769–1770, Boston merchant William Jackson was accused of violating the Non-Importation Agreement. His name, along with the names of others, was printed in the newspapers and on a broadside that was published around January 23, 1770. The other violators of the agreement were John Bernard, James McMasters, Patrick McMasters, John Mein, Nathaniel Rogers, Theophilus Lillie, John Taylor, Ame and Elizabeth Cummings, Israel Williams, and Henry Barnes. Jackson’s store was located next to the Town House in Boston. As promised, a handbill was printed that called Jackson out for his non-compliance, and encouraged people to boycott his store. The handbill reads:

“WILLIAM JACKSON, an IMPORTER; at the BRAZEN HEAD, North Side of the TOWN-HOUS, and Opposite the Town-Pump, in Cornhill, BOSTON.

It is desired that the SONS and DAUGHTERS of LIBERTY, would not buy any one thing of him, for in so doing they will bring Disgrace upon themselves, and their Posterity, for ever and ever, AMEN.”

Significance of the Boston Non-Importation Agreement of 1768

The Boston Non-Importation Act of 1768 is important to the history of the United States because it showed Americans were willing to stand up to British policies by living without the luxuries provided by British goods and products. Americans came to realize they could, in fact, do without British goods, and could make their own, even though it was a direct violation of the Navigation Acts. This concept would be critical to enforcing the protests against the Tea Act and, later on, the disruption of trade that occurred due to the American Revolutionary War.

Frequently Asked Questions About the Boston Non-Importation Agreement of 1768

How did the Daughters of Liberty support the Boston Non-Importation Agreement?

The Daughters of Liberty formed during the Stamp Act Crisis. After the Townshend Acts were passed, the Boston members supported the agreement by spinning wool and kitting wool into cloth. They also refused to drink imported English tea and came up with different concoctions of herbs to drink instead.

Was the Boston Non-Importation Agreement successful?

The agreement had limited success. Boston merchants and traders successfully reduced imports by about 50%, but that was less than the non-importation agreement that had been implemented in protest of the Stamp Act. It also hurt that the Southern Colonies did not take action and enforce their own non-importation agreements. Overall, it is estimated that British imports were reduced by around 38% during the time the agreement was in place.

How did the Boston Non-Importation Act contribute to the Boston Massacre?

The Sons of Liberty harassed Boston businessmen, their shops, and their customers who refused to comply with the Non-Importation Agreement. From 1768 to 1770, tension built in Boston over the Townshend Acts, the presence of British troops in the city, and the enforcement of the agreement. Protests against shopowners included an incident on February 22, 1770, when a mob protested in front of a shop owned by Theophilus Lillie, who was accused of being an “Importer.” A British customs employee, Ebeneezer Richardson, tried to break up the mob, which chased him back to his home. Once inside, he fired on the crown with a musket — killing 11-year-old Christopher Seider. Doctor Joseph Warren conducted the autopsy on the boy and confirmed he was killed by Richardson’s weapon. Samuel Adams arranged for Seider’s funeral and a public display was made of what Richardson had done. An estimated 2,000 people attended the funeral at the Granary Burial Ground which helped fuel the outrage of the people of Boston. On March 5, 1770, the Boston-Gazette and Country printed the story of Seider’s funeral. Later that night, a mob of angry Bostonians cornered British troops near the Boston Town House, while pelting them with rocks and hitting them with sticks. Fearing for their lives, the nervous Redcoats fired into the crowd, killing several Americans, including Crispus Attucks.

Use the following links and videos to study the Boston Non-Importation Agreement, the Townshend Acts, Boston Patriots, and the Sons of Liberty for the AP US History Exam.

The definition of the Boston Non-Importation Agreement of 1768  for the AP US History exam is a document signed by Boston merchants and traders in protest of the Townshend Acts. The signers agreed to a boycott of British goods and products until the Townshend Acts were repealed. 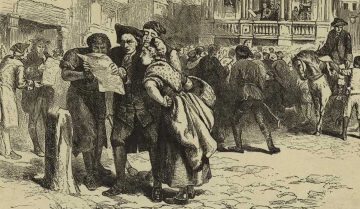