Summary of the Confederation Congress

Although the Confederation Congress had limited authority, it did succeed in signing a peace treaty with Britain to end the American Revolutionary War. It also passed legislation that organized the territory that Britain cede to the United States as the party of the Treaty of Paris in a way that satisfied the states.

Unfortunately, the Confederation Congress was unable to eliminate slavery in the new territory, although Thomas Jefferson did try. Congress was also unable to develop a peaceful, fair resolution to the land claims of the Native American Indian tribes. These issues contributed to decades of social conflict and sectionalism and would cause the forced removal of the Indians from their lands and the Civil War.

The Confederation Congress disbanded on March 4, 1789, when the government under the United States Constitution went into effect.

The Treaty of Paris was signed on September 3, 1783, and the United States took control of the land between the Appalachian Mountains and the Mississippi River. However, there were various claims to the land. Not only did the Indians living there claim the territory, but also states like Connecticut and Virginia. One of the major accomplishments of the Confederation Congress was the development of legislation that provided guidelines for adding states to the union and property ownership. 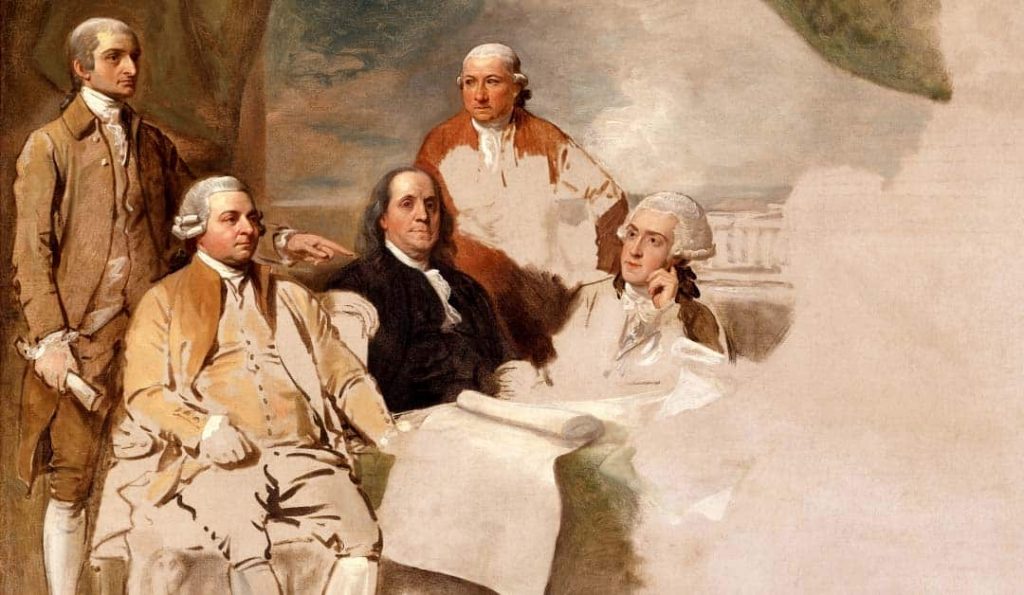 Since the Confederation Congress could not easily raise money through taxes, it intended to sell the land in what was known as the Ohio Country. This would give Congress money to operate and pay its debts. Unfortunately, there were already squatters in the Ohio Country, and there was a concern in Congress that the squatters might attempt to form their own country, west of the Appalachians. The Congress negotiated with the Indian tribes and states for sole possession of the land. However, as negotiations were going on, Congress passed an ordinance on April 23, 1784.

The Ordinance of 1784 was written by Thomas Jefferson, with help from Jeremiah Townley Chase of Maryland and David Howell of Rhode Island. It called for the land that lay west of the Appalachian Mountains, north of the Ohio River, and east of the Mississippi River to be divided into 10 states, which would start out as territories. Once the population reached a certain point, each of them could become a state, with the same rights as the original 13 colonies.

In the original draft, Jefferson included a clause that abolished slavery and involuntary servitude after 1800 in the Northwest Territory. Unfortunately, Jefferson’s attempt to make the new states free for all was voted down by one vote and removed from the Ordinance.

The Northwest Ordinance did not lay out how the land would be distributed in the Northwest Territory, and it became an issue as the Indians and states began to cede their claims to the land. The Land Ordinance of 1785 addressed the issue and was passed on May 20, 1785. Once again, Thomas Jefferson devised the plan, which established guidelines for setting up townships and laid the foundation for the land ownership system in the United States. It also provided instructions on how to reserve portions of townships for those who had served in the Continental Army during the American Revolution. Despite the new regulations, squatters were still moving into the Northwest Territory, while many Indian tribes also refused to leave.

On July 13, 1787, the Northwest Ordinance was passed. It was developed by Thomas Jefferson, Nathan Dane, Manasseh Cutler, and Rufus King, and set established new steps for how each territory could become a state. In addition, the Northwest Ordinance included six Articles that expanded and revised previous legislation. Perhaps most important was Article 6, which banned slavery and involuntary servitude in Northwest Territory. 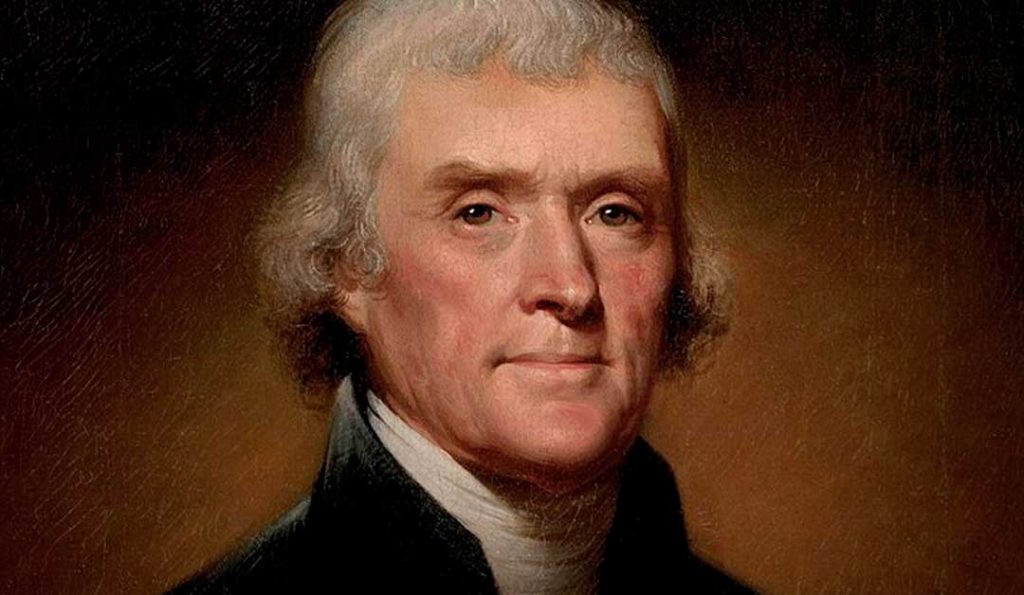 This painting of Thomas Jefferson was made by Rembrandt Peale. Jefferson played a significant role in the formation of the new territory of the United States. Image Source: Wikipedia.

In 1786 and 1787, Shays’ Rebellion took place in western Massachusetts. It was an armed insurrection made up of mostly poor farmers led by Daniel Shays, a veteran who had served as a captain in the Continental Army. They were upset over economic policies that caused many farm foreclosures and the imprisonment of debtors.

Some Americans, who referred to them as Shaysites, saw them as heroes, carrying on the spirit of the American Revolution by protesting excessive taxes. Others saw them as a danger to the new nation.

Shays’ followers, who called themselves Regulators, marched on several Massachusetts courthouses in 1786 to halt foreclosure proceedings and the imprisonment of debtors. In December 1786, James Bowdoin, the Governor of Massachusetts, gathered the militia. They were led by Benjamin Lincoln, and the funding was provided by Massachusetts businessmen.

The Rebellion reached its climax on January 25, 1787, when the Massachusetts militia defeated Shays and his followers as they attempted to capture a federal arsenal at Springfield. The insurgency ended for the most part on February 3, 1787, when the remainder of Shays’ followers were surprised by militia forces and took advantage of an offer of a general amnesty.

Although the Rebellion failed, it was significant because it underscored the position of those who argued that the federal government established by the Articles of Confederation was weak and ineffective, and prompted support for the Constitutional Convention.

In the years following the American Revolution, there was a growing divide, which was increased by Shays’ Rebellion. Some people wanted a strong, centralized government, and they were known as Federalists. People that believed more in individual liberties and state sovereignty were known as Anti-Federalists. The political division resulted in the Constitutional Convention of 1787, which took place in Philadelphia from May 14 to September 17.

George Washington was elected president of the Convention. 55 of 70 delegates appointed by the states attended the Convention. Rhode Island chose not to attend and did not send any delegates. 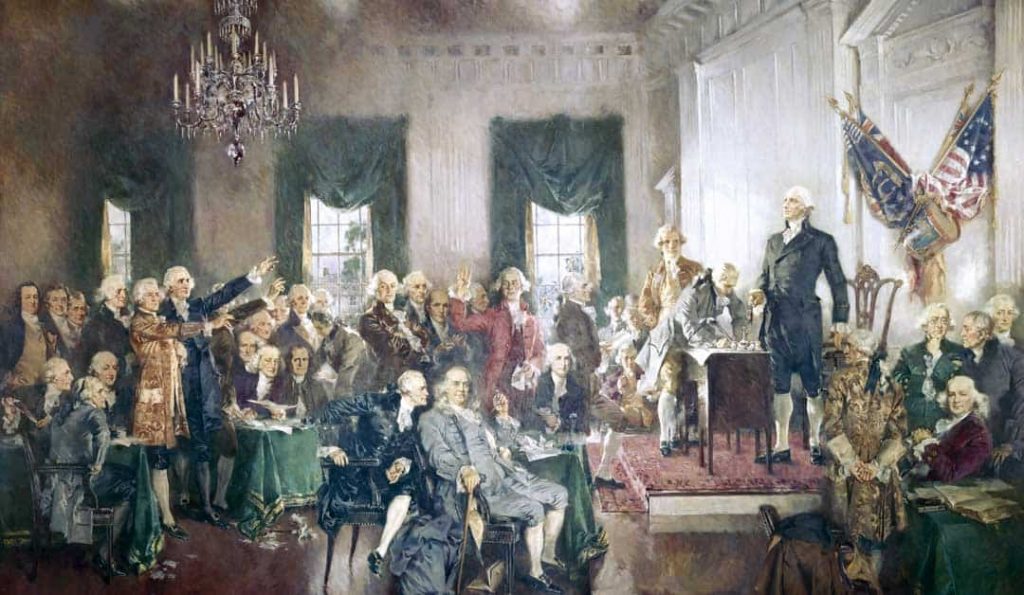 This painting by Howard Chandler Christy depicts the signing of the Constitution. Image Source: Architect of the Capitol.

The Convention was originally called to revise the Articles of Confederation. However, there was fierce debate over the proposed solutions, including James Madison’s “Virginia Plan.” Although progress was made on many issues, it became apparent through the debate the divide between the northern states and southern states was more significant than differences between individual states.

On July 24, a Committee of Detail was formed, which was tasked with drafting a Constitution. They used parts of the Virginia Plan, modifications to the Virginia Plan that had been proposed earlier by the Convention, and other sources, including the Articles of Confederation, to write the first draft. The Committee reviewed the document, section by section, from August 6 through September 10. When they were finished, a Committee of Style was set up to help clean up and polish the document.

On March 4, 1789, the new federal government officially began to operate and the members of the First United States Congress were seated at Federal Hall in New York City. After Congress counted the votes of the Electoral College, it certified that George Washington had been elected as the first President of the United States and John Adams as the First Vice-President of the United States. Adams was sworn in on April 21 and Washington was sworn in on April 30.

Presidents of the United States in Congress Assembled

The following men served as President from 1781–1789 under the Articles of Confederation. The position was officially called “President of the United States in Congress Assembled.”

Thomas McKean served from July 10, 1781, to October 23, 1781. During his term as President, Congress received the news of the British surrender at Yorktown.

Elias Boudinot was President from November 4, 1782, to November 3, 1783. During his term, the British evacuated Charleston in January 1783, and the Treaty of Paris of 1783 was signed in September 1783, which officially ended the American Revolutionary War.

Thomas Mifflin was President from November 3, 1783, to November 30, 1784. During his term, George Washington resigned from the army. On December 23, 1783, in a ceremony in Annapolis, Maryland, Washington handed his commission and resignation speech to Mifflin.

John Hancock was appointed President and held the title from November 23, 1785, to June 6, 1786. However, Hancock was ill and he could not perform the duties of the office. His duties were carried out by David Ramsay from November 23, 1785, to May 15, 1786, and then Nathaniel Gorham from May 15 to June 5, 1786. Ramsay and Gorham were Chairman of the Confederation Congress.

Cyrus Griffin was the last President of the Congress Assembled and served from January 22, 1788, to March 2, 1789.

Significance of the Congress of the Confederation

The Myth of Presidents Before George Washington