The Emancipation Proclamation was issued by President Abraham Lincoln on January 1, 1863. It stated that people held as slaves in areas that were in rebellion against the United States were free.

Summary of the Emancipation Proclamation, One of President Abraham Lincoln’s Greatest Accomplishments

The Emancipation Proclamation was a proclamation issued by President Abraham Lincoln on January 1, 1863, that declared all “all persons held as slaves” in the states that were in rebellion against the United States were “henceforward…free.” After decades of division over slavery, the Secession Crisis erupted after Abraham Lincoln won the Presidential Election of 1860. Southern states left the Union, starting on December 20, 1860. They believed they had the right to secede, but Lincoln and others saw it as a rebellion against the government, and that it was necessary to preserve the Union. Soon after the war started, Federal officials started looking at ways to keep the Confederacy from utilizing enslaved people in the war effort. Congress passed two laws for the purpose of depriving the Southern states of slaves that were captured by the Union Army, but it failed to turn the tide of the war. In the North, there were people who believed emancipation would strengthen the war effort. In July 1862, President Lincoln introduced the concept of emancipation for Southern slaves to the members of his cabinet. His cabinet agreed but also wanted to wait to go public with the announcement until the Union had won a major victory on the battlefield. On September 17, 1862, Union forces won a strategic victory at the Battle of Antietam and five days later, Lincoln signed the Preliminary Emancipation Proclamation. In the proclamation, Lincoln said the ongoing purpose of the war was to restore the Union, but also said anyone held in slavery in any territory in rebellion against the United States would be “forever free.” The Southern states had 100 days to rejoin the Union or risk losing their slaves. None of them withdrew from the Confederacy and Lincoln issued the Emancipation Proclamation on January 1, 1863, which declared slaves in rebellious territories to be free. The proclamation was an important step toward the abolition of slavery in the United States, which culminated in the ratification of the Thirteenth Amendment on December 18, 1865. 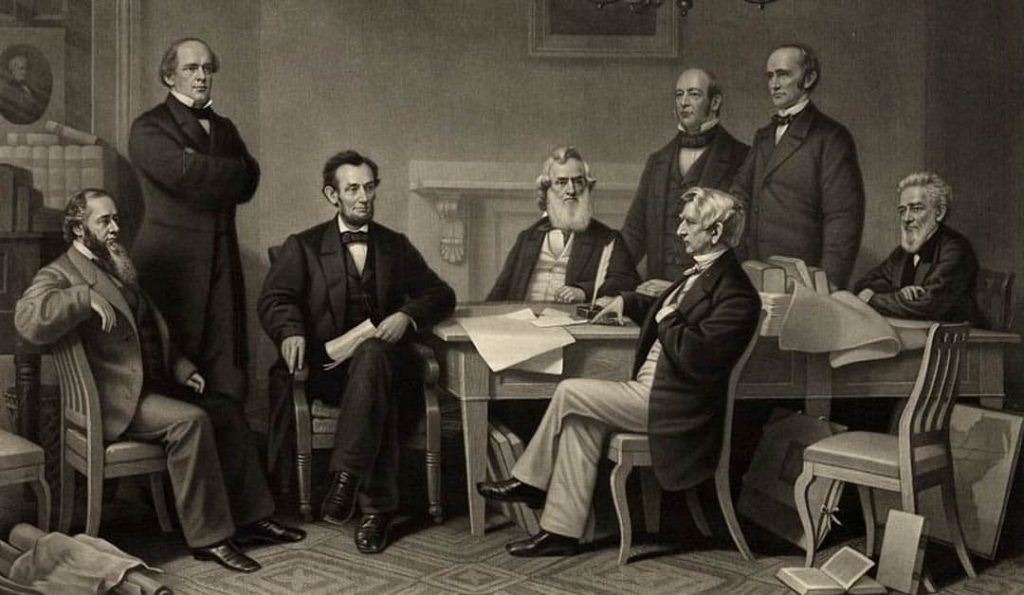 For over fifty years, the practice of slavery in the United States engendered a sectional schism between the North and the South that became so deep that the two sides could no longer peacefully coexist. When Southern states began leaving the Union on December 20, 1860, their secessionist leaders asserted that they were exercising their inherent right to leave an alliance of states based on the “consent of the governed.” Unionists, including President-Elect Abraham Lincoln, painted the conflict as a rebellion against the United States government. For them, the war was about preserving the Union.

When war erupted in April 1861 at Fort Sumter, South Carolina, many believed that the conflict would not last long. They reasoned that the newly forming Confederacy of Southern states stood little chance against the might of the more densely populated North. Despite an embarrassing defeat at the First Battle of Bull Run, predictions of an early Union victory seemed accurate by June 1862. With Major General George McClellan and his massive Army of the Potomac camped within sight of the church spires of Richmond, the fall of the Confederate capital seemed inevitable. Events soon proved that conclusion to be incorrect.

After severe wounds incapacitated General Joseph Johnston at the Battle of Seven Pines on May 31, 1862, Confederate President Jefferson Davis appointed General Robert E. Lee to command what would become the Army of Northern Virginia. Lee assumed the burden of saving Richmond.

Rather than continuing the defensive posture of his predecessor, Lee went on the offensive. In a stunning series of six engagements between June 25 to July 2, 1862, known as the Seven Days Battles, Lee drove McClellan’s Army away from Richmond and nearly back to the Atlantic Ocean.

Sensing that McClellan no longer posed a serious threat, Lee pushed his army north and defeated Major General John Pope and his newly created Army of Virginia at the Second Battle of Bull Run (August 28–30, 1862). Emboldened by the defeat of both major Union armies in the Eastern Theater, Lee next took the war to Northern soil in the late summer of 1862. On September 4, the Army of Northern Virginia began crossing the Potomac River into Maryland.

As the war dragged on, federal officials stepped up their efforts to deprive the Confederacy of services being rendered by slaves. As early as August 6, 1861, Congress passed the First Confiscation Act conferring “contraband” status on slaves being used to support the Confederate war effort. In effect, the bill made slaves captured by Union armies the property of the U.S. government, much like any other contraband captured during combat.

On March 13, 1862, Congress strengthened the intent of the First Confiscation Act by enacting an article of war that stated:

All officers or persons in the military or naval service of the United States are prohibited from employing any of the forces under their respective commands for the purpose of returning fugitives from service or labor, who may have escaped from any persons to whom such service or labor is claimed to be due, and any officer who shall be found guilty by a court-martial of violating this article shall be dismissed from the service.

On July 17, 1862, Congress passed the Second Confiscation Act. Applicable only in areas occupied by Union armies, the new measure required individuals in rebellion against the United States to surrender within sixty days of the legislation’s enactment. The act provided that slaves owned by those who did not comply were to “be deemed captives of war, and shall be forever free of their servitude, and not again held as slaves.” The law inched closer to general emancipation by further stipulating that no fugitive slave “shall be delivered up . . . unless the person claiming said fugitive shall first make oath” to be the “lawful owner” and that the claimant was not in rebellion against the United States.

As the Union’s fortunes on the battlefield languished, the claim that emancipation would strengthen the federal war effort became increasingly compelling. By early July, President Lincoln was already drafting a presidential proclamation for blanket emancipation. At a cabinet meeting on July 22, 1862, the President formally introduced the idea.

Lincoln was not seeking guidance or approval regarding his decision; he had decided to proceed. Secretary of the Navy, Gideon Welles, recalled the president stated that he, “had made a covenant with God. . . . that if the army drove the enemy from Maryland he would issue his Emancipation Proclamation.” According to Welles, Lincoln presented emancipation as “a military necessity, absolutely essential to the preservation of the Union. We must free the slaves or be ourselves subdued. The slaves were undeniably an element of strength to those who had their service, and we must decide whether that element should be with us or against us.” The only item open for discussion was the timing of the announcement. Lincoln agreed with the suggestion of Secretary of State William H. Seward that the decision not be disclosed publicly until Union forces could back it with a major victory on the battlefield.

The president had to wait nearly two months for the victory he needed. On September 17, 1862, the Army of the Potomac and the Army of Northern Virginia engaged near Sharpsburg, Maryland. In the bloodiest single day of fighting in the American Civil War, the Battle of Antietam ended in a tactical draw. Still, the Union claimed a strategic victory when Robert E. Lee withdrew his forces from Maryland two days after the battle.

On September 22, 1862, Lincoln signed the Preliminary Emancipation Proclamation. Calling upon his authority as President of the United States and Commander-in-Chief of the Army and Navy, Lincoln proclaimed,

That on the first day of January in the year of our Lord, one thousand eight hundred and sixty-three, all persons held as slaves within any State, or designated part of a State, the people whereof shall then be in rebellion against the United States shall be then, thenceforward, and forever free; and the executive government of the United States, including the military and naval authority thereof, will recognize and maintain the freedom of such persons, and will do no act or acts to repress such persons, or any of them, in any efforts they may make for their actual freedom.

Although Lincoln asserted in the opening paragraph of the document that “the war will be prosecuted for the object of practically restoring the constitutional relation between the United States, and each of the States,” the presidential proclamation redefined the purpose of the Civil War. Lincoln’s disclaimer aside, henceforward, the document made it clear that freeing the slaves was as much of the focus of the war as it was about restoring the Union. This painting depicts intense fighting at the Battle of Antietam. Image Source: Library of Congress.

Initially, the proclamation had little impact on the prosecution of the war. Lee won another great victory at the Battle of Fredericksburg (December 11–15, 1862). Not surprisingly, no southern states withdrew from the Confederacy during the 100-day grace period the president proposed. Despite Republican setbacks in the November, mid-term congressional elections, Lincoln did not back down. On January 1, 1863, just before signing a revised and expanded version of the executive order, Lincoln stated,

I never, in my life, felt more certain that I was doing right than I do in signing this paper.

In the final draft of the Emancipation Proclamation, President Lincoln did four important things:

Outcome of the Emancipation Proclamation

Reaction to the proclamation may have been as significant as the document itself. Critics were quick to note that the executive order freed few, if any, slaves since it applied only to areas in rebellion, where the government had no effective authority. Although applauded by many abolitionists, the document did not go far enough to appease others who had been clamoring for blanket emancipation since before the beginning of the Civil War. This illustration depicts African-Americans reading the Emancipation Proclamation. The illustration was part of a pamphlet published by Lucius Stebbins in 1864. Image Source: Library of Congress.

On the international stage, the transformation of the war from a political event to a moral crusade may have been influential in preventing foreign intervention by European powers. At home, some Northerners who initially supported the war to preserve the Union lost their enthusiasm for continuing the conflict because they refused to champion a crusade to free slaves. As expected, the proclamation was nearly universally condemned in the South, and undoubtedly steeled the resolve of Southerners to continue the conflict.

Through it all, Lincoln stood by his conviction that he did all he could within the bounds of his constitutional authority as President of the United States and as Commander-in-Chief to bring an end to slavery. In February 1865, shortly before his assassination, Lincoln described the Emancipation Proclamation as “the central act of my administration and the great event of the nineteenth century.”

Significance of the Emancipation Proclamation

While the Emancipation Proclamation freed slaves only in areas in rebellion against the United States, it was a crucial step toward the adoption of a national policy abolishing slavery. In 1864 and 1865, the states of Arkansas, Louisiana, Maryland, Missouri, and Tennessee passed new state constitutions outlawing the peculiar institution. With Lincoln’s support, on April 8, 1864, the U.S. Senate passed a proposed amendment to the constitution abolishing slavery nationwide. The House of Representatives followed suit on January 31, 1865. On December 6, 1865, Georgia became the twenty-seventh state to ratify the Thirteenth Amendment, which outlawed “slavery and involuntary servitude” in the United States. On December 18, Secretary of State William Henry Seward declared the Thirteenth Amendment officially ratified and part of the United States Constitution.