Summary of the First Battle of Bull Run

The First Battle of Bull Run, also known as the First Battle of Manassas, took place on July 21, 1861, near Manassas, Virginia, along the banks of a mall river called Bull Run. Union forces marched south from Washington, D.C., and attacked Confederate forces. The Confederates were able to turn back the assault, forced the Union forces to retreat, and gained a strategic victory. Illustration of the First Battle of Bull Run by Kurz & Allison. Image Source: Library of Congress.

History of the First Battle of Bull Run Underestimating the resolve and grit of Southern forces, many Northerners believed that the Union’s volunteer army assembling in Washington, D.C., could quickly crush the rebellion by capturing Richmond, Virginia, which became the capital of the Confederacy on May 1, 1861. Thus, President Lincoln and other Federal officials urged Brigadier General Irvin McDowell, commander of the Union forces in the Military Department of Northeastern Virginia, to launch an offensive against Richmond and to bring the rebellion to an end before the ninety-day enlistments of his soldiers expired.

Believing that his troops were not yet ready for combat, McDowell reluctantly relented to political pressure and marched roughly 28,450 troops out of Washington and into Virginia on July 16.

Blocking McDowell’s path to Richmond was a force of about 22,000 Confederate soldiers deployed along the Alexandria Line about thirty-five miles west of Washington. Established by Brigadier General Milledge Luke Bonham, the Alexandria Line roughly paralleled Bull Run, a small stream that rises in the Bull Run Mountains of northern Virginia and feeds into the Occoquan River in eastern Virginia.

On May 31, 1861, Major General Robert E. Lee issued General Orders, No. 149 (Virginia Forces) replacing Bonham with Beauregard. By the time McDowell began his offensive, Beauregard was referring to his new command as the Confederate Army of the Potomac (see General Orders, No. 20, June 20, 1861, (AOP-CSA)). Besides guarding the main routes from Washington to Richmond, Beauregard’s Alexandria Line also protected the vital rail station at Manassas Junction (now Manassas) where the Manassas Gap Railroad crossed the Orange and Alexandria Railroad.

As McDowell’s forces approached the Rebel defenses on July 18, a Confederate brigade commanded by Brigadier General James Longstreet repulsed a Federal brigade commanded by Brigadier General Daniel Tyler attempting to cross Bull Run at Blackburn’s Ford near Beauregard’s right flank. The Confederate victory at the minor Battle of Blackburn’s Ford prompted McDowell to redirect his offensive to Beauregard’s left flank. It also instilled a sense of confidence in the Rebel troops that would prove invaluable three days later.

Following the Battle of Blackburn’s Ford, McDowell began shifting the bulk of his army west to cross Bull Run and sweep around Beauregard’s left flank undetected. Striking out at 2:30 a.m. on July 21, 13,000 Union soldiers crossed Bull Run near Sudley Church. Meeting little Confederate resistance, the Federals fired the first shots of the battle at about 6 a.m. when they encountered Rebel pickets. At roughly 8:30, Major Edward Porter Alexander, Beauregard’s signal corps’ commander stationed atop Signal Hill, spotted the Yankee maneuver and alerted Colonel Nathan “Shanks” Evans, “Look out for your left, your position is turned.” In what was reportedly the first use of signal flags for long-range communication during the Civil War, Alexander also alerted Beauregard of McDowell’s movement.

By the time Beauregard could react to Alexander’s warning, McDowell’s forces had turned the Confederate left flank. Recognizing the imminent danger of the situation, Colonel Evans, without orders, redeployed his small brigade near the base of Matthews Hill to buy time for Beauregard to reinforce the Confederate left.

In the meantime, the vanguard of Major General Joseph Johnston’s Confederate Army of the Shenandoah, which had departed for Manassas on July 18, began arriving in the area by train. When Brigadier General Barnard Elliott Bee, Jr. witnessed Evans’ heroic effort to hold back the Yankee onslaught on Matthews Hill, he threw his 3rd Brigade into the fray.

Despite being heavily outgunned and out-manned, Evans and Bee held off the Yankee advance against Matthews Hill that began at 10:30. Although the Rebels paid dearly, they bought precious time for Beauregard to establish a new defensive line behind them on Henry Hill. 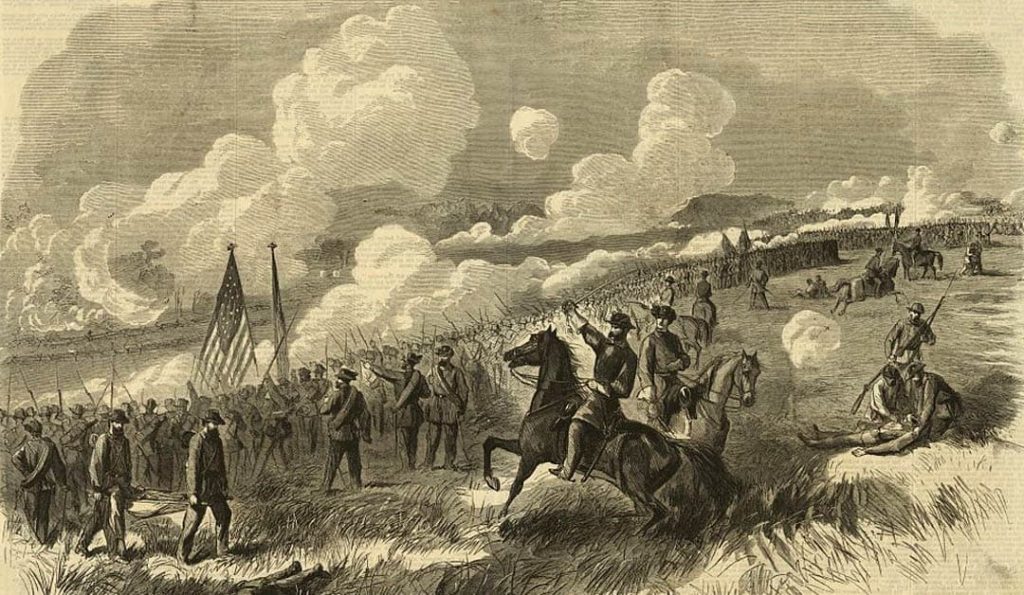 Colonel Ambrose Burnside leads his brigade in an attack on the Rebel Batteries at Bull Run. Sketched on the spot by A. Waud. Image Source: Library of Congress.

When the Federals finally forced the Confederate defenders off of Matthews Hill after 11:30, McDowell halted his advance for nearly two hours to rest and reorganize his forces. Beauregard used the delay to his advantage by further reinforcing his defenses, anchored by Colonel Wade Hampton’s South Carolina Legion on Henry Hill.

By the time McDowell resumed his offensive, most of Johnston’s 10,000 Rebel soldiers were in the area. Between noon and 1 p.m., Brigadier General Thomas J. Jackson extended and anchored Hampton’s left flank by deploying the 2,000 soldiers of his brigade in a treeline just below the crest of Henry Hill. Jackson’s arrival cemented a formidable Confederate defensive line. Throughout the afternoon, Johnston continued to funnel reinforcements to Jackson’s left and right while Beauregard directed the action on the field against McDowell’s unsuccessful piecemeal attacks.

At roughly 3 p.m., Jackson launched a counterattack that eventually led to the capture of most of the Union artillery on Henry Hill. When General Bee observed Jackson’s thrust, he reportedly stated,

There is Jackson standing like a stone wall. Let us determine to die here, and we will conquer. Rally behind the Virginians!

Bee’s pronouncement, which probably fewer than fifty men heard, had little impact on the outcome of the battle, but it etched the names of Jackson and his brigade in Confederate folklore. For the rest of the Civil War, the name “Stonewall” represented the standard of excellence for Rebel soldiers.

By 5 p.m., McDowell’s entire force was in full flight. With the Rebels in hot pursuit, the retreat disintegrated into a rout, sending the panicked Yankees scurrying back to Washington. To the consternation of Confederate President Jefferson Davis, Southern forces did not pursue the fleeing Northerners.

The Myth of the First Battle of Bull Run

Civil War lore perpetuates the myth that throngs of civilians from Washington, including some noted politicians, who ventured out to witness the fighting as they picnicked, impeded the Federal retreat. Indeed, many curiosity-seekers rode out toward Manassas Junction that day, but most of them traveled no farther than Centerville—about twenty-five miles away. Rather than impeding the Union retreat, it is more likely that the terrified civilians led the mad stampede back to Washington once the Union retreat began.

Outcome of the First Battle of Bull Run

The outcome of the First Battle of Bull Run was an embarrassing loss for the Federal forces. One week after the battle, the federal government reorganized its forces near the nation’s capital. On July 25, 1861, the War Department merged the Department of Northeastern Virginia with the Department of Washington to create the Division of the Potomac and named Major General George B. McClellan as the new principal commander of Union forces in the East. By August, the War Department relegated McDowell to a division commander in McClellan’s new Army of the Potomac.

Although small in comparison with what was to come, the magnitude of the First Battle of Bull Run proved sobering to both sides. Over 50,000 soldiers took part in what was the largest conflict in North America up to that time. Combined casualties totaled nearly 5,000 (killed, wounded, and captured or missing). Nearly 850 Americans (460 Union plus 387 Confederate) perished on the battlefield that day. Casualties for the Union totaled 2,896 (460 killed, 1,124 wounded, and 1,312 captured or missing). The Confederacy lost 1,982 soldiers (387 killed, 1,582 wounded, and 13 missing).

The tenacity with which the Confederate soldiers fought to defend their homeland dashed Northern hopes of a decisive victory that would quickly quash the rebellion. On the other side, Southerners received their first glimpse of the enormity of resources—men and materiel—that the Union could, and would, bring to bear to achieve victory four bloody years later.

Significance of the Battle of Bull Run

The outcome was significant because it shocked many people, including Northern politicians, who believed the conflict between the North and South would be short-lived. It also provided Southern forces with confidence they could hold their own with the Northern army.

Learn More About the First Battle of Bull Run