Mercantilism Summary and Definition of the Mercantile System

Mercantilism is an economic theory that focuses on the trading of goods as a means to create wealth.

In order for a nation to create more wealth, it needs to export more goods than it imports — it needs to sell more than it buys. If it can achieve that, it creates a positive trade balance for the nation.

In Mercantilism, for a nation to maintain a positive trade balance, it must implement government regulations — restrictions — that protect its interests. This is called protectionism because the nation needs to protect — or control — all aspects of its economy, including:

By controlling the economy, a nation can maintain its wealth, but if it has surplus goods then it can sell them to other nations, and create more wealth.

The principles of Mercantilism varied, depending on the time and the nation. However, the main concepts were.

History and Overview of Mercantilism in Europe

By the end of the 15th century, there were dramatic changes happening in the way trade was conducted, which led to the Mercantile System.

Mercantilism gained popularity in Europe as nations transitioned from feudal governments to national governments, especially from the 16th Century through the 18th Century — the Age of Exploration.

The discovery of the New World by Columbus in 1492 and the sea route to India by Vasco de Gama from 1497 to 1499 opened up new ways for nations to obtain wealth. It also created a greater need for nations to have standing armies in order to protect themselves and their colonies. As nations grew they experienced turmoil from wars, plagues, and religious differences which created social unrest that led to political changes that helped transform kingdoms into nation-states.

England and other European powers were competing with each other, trying to gather as much gold and silver as they could. Each of them worked to create their own stand-alone economic environment where they could be as self-sustaining as possible. In other words, they wanted to be able to have everything they needed for their empires to survive — food, raw materials, products, and ships — produced from within the empire.

However, the English Crown had been enacting laws well before the Age of Exploration that allowed it to control the growth of industry and trade.

In the 1300s, King Edward III gave a small group of merchants control over the wool industry. In England, wool was used to make heavy clothes called woolens or broadcloths. English wool shipped to Europe was used to make fine cloths. In England, the mills were located near rivers with fast running water, which was vital to the manufacturing process. 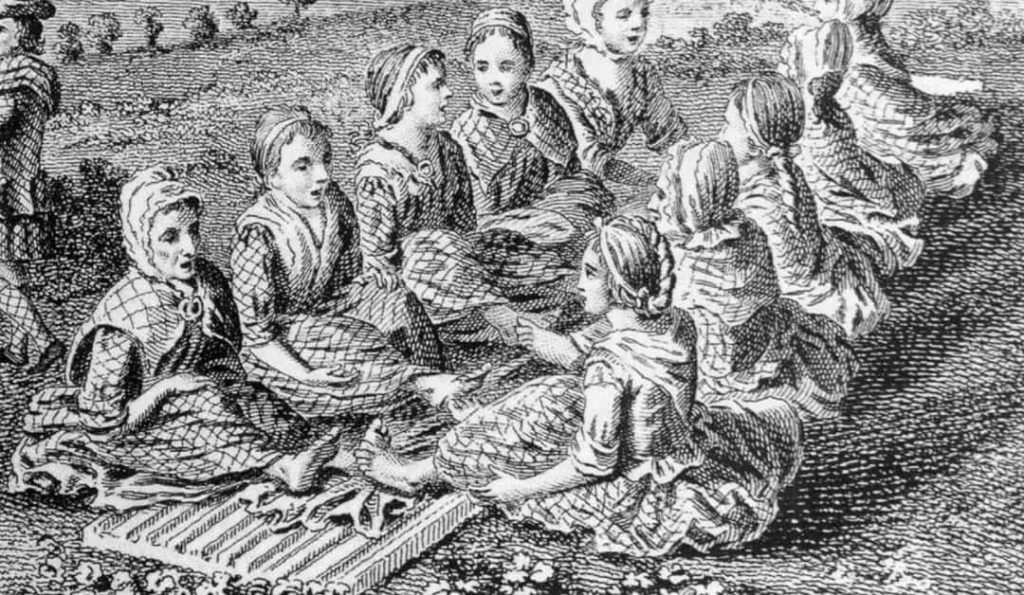 Women waulking wool to cleanse the material of oils, dirt, and other impurities (Public Domain, Wikimedia).

The Crown saw an opportunity to raise revenue from the shipping of wool and decided to place a tax — called poundage — on wool that was exported to Europe and a tariff — another tax — on imported wool. King Edward made a deal with a small group of wool merchants. He gave them a monopoly on the wool industry and in return, they agreed to collect the taxes.

By the middle of the century, the group was expanded and was called the “Merchants of the Staple.”  All wool that was exported from England had to be shipped out through specific ports and sent to specific ports in Europe. The significant port in England was Bristol, in the southwest.

In the middle of the 1600s, a new method of manufacturing was introduced that produced a less expensive, lightweight cloth. The material was called draperies and it was spun from a fine yard called worsteds. Draperies could be dyed and decorated and could also be exported to areas where the temperatures were higher and people did not necessarily need warm clothes. Swift rivers were not needed to make draperies, so the mills were built and flourished in more rural areas, especially outside of London.

London became the largest market for draperies and it was inexpensive for the mills in the countryside to send their goods to the city. There was another benefit that appealed to merchants. When they dealt with rural mills, they were able to avoid restrictions of the trade guilds, which were usually located in the towns.

As the draperies industry grew, so did the concerns of the woolens industry. The woolens merchants appealed to the government for help and the Weavers’ Act was passed in 1555. It limited the number of looms a mill outside of the towns could have, but there was very little enforcement.

In 1563, Queen Elizabeth I instituted the Statute of Artificers, which limited the number of apprentices a mill could have, regardless of where the mill was located. As before, there was little enforcement of the law.

The way England dealt with the woolens and draperies industry foreshadowed how it would deal with just about any industry as the world around it expanded.

As a global economy emerged, England implemented regulations that allowed it to control most of the economy of its empire. However, what happened over time, as England transformed into Great Britain, is that it started to treat its colonies like they were competing nations.

Mercantile System in the American Colonies

The American Colonies were a significant part of the English Mercantile System for two main reasons:

England did not profit from the sale of goods. It made its profit by taxing the shipping and transportation of goods. The taxes were usually in the form of customs duties, which were based on how much of a commodity was being shipped. For example, customs duties were charged for each gallon of molasses in a shipment.

England was slow to develop policies to oversee the American Colonies because the Colonies were slowly established. It took well over a century for the Thirteen Colonies to be established.

The first permanent settlement was made at Jamestown, Virginia on May 13, 1607. For the next six years, the colony struggled. In 1612, John Rolfe obtained tobacco seeds from the Orinoco River Valley that produced sweet, mild tobacco, unlike anything else that was grown in Virginia. Samples of Rolfe’s tobacco were taken to England in 1613 and proved to be popular. 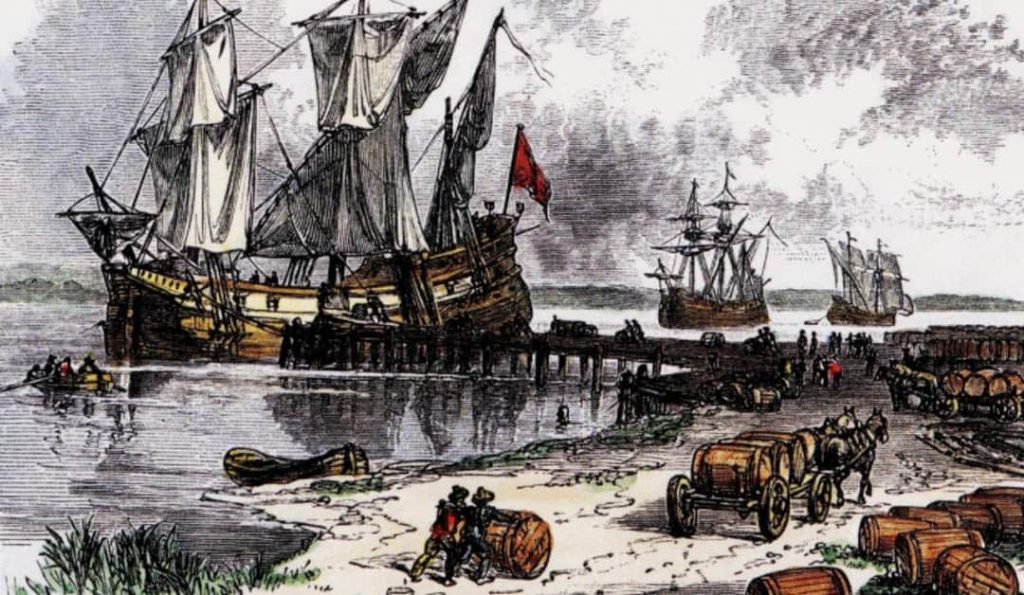 Illustration of workers loading tobacco onto a ship for transportation.

After Jamestown, the next permanent colony on the east coast of America was founded in December 1620, when the Pilgrims founded Plymouth Colony. In 1628, Salem Colony was founded in Massachusetts Bay. Two years later, Congregationalist Puritans, led by Governor John Wentworth, founded the Massachusetts Bay Colony and settled the town of Boston.

The other colonies were established between 1632 and 1733 when James Oglethorpe settled Georgia.

The colonies were largely left on their own because England was involved in wars in Europe and North America, along with its own English Civil Wars. The Civil Wars came to an end in 1651, which allowed England to turn some of its attention back to the Western Hemisphere.

Laws Based on Mercantilism

From 1651 through 1765, England, and later Great Britain, imposed regulations on the production of raw materials and goods, methods of shipping, and shipping routes. The laws were set up so that Britain benefited, at the expense of its colonies, and allowed Britain to maintain a favorable trade balance against them, just like it sought to do against other European powers. These regulations are commonly known as the Acts of Trade and Navigation.

The Navigation Acts were passed between 1651 and 1733. They required all raw materials and goods to be shipped on English ships and to be delivered to English ports, which forced the colonies into the Triangular Trade system.

The purpose of the Navigation Act of 1651 was to force all exports from the colonies to an English port, so customs duties could be paid before the ship went to a foreign harbor. The goods had to be carried on English ships with English crews.

The purpose of the Navigation Act of 1663 was to require shipments picked up in foreign ports to be taken to England. The ensured customs duties were paid.

The purpose of the Navigation Act of 1673 was to close loopholes in previous acts to make sure customs duties were collected. It forced all shipments within the empire to be taken to an English port and banned colonial merchants from trading with foreign nations.

The Trade Acts were aimed at restricting the growth of industry outside of England. As part of the Mercantile System, England wanted to control manufacturing and allow its domestic manufacturers to monopolize the system.

The purpose of the Wool Act was to protect the clothing industry in England. It was primarily aimed at Ireland, but also affected the American Colonies. The act prohibited the shipment of woolen fabrics across colonial lines.

Triangular Trade is defined as trade between three ports or regions. Trade routes in the British Empire were established across the Atlantic Ocean and were made possible by the growth and development of the American Colonies. The Navigation Acts forced ships to use specific trade routes between three regions — England, Africa, and North America.

Enforcement of Mercantilism in the Colonies

The Mercantile policies of the Navigation Acts and Trade Acts were enforced by Custom Officials and, later on, the Royal Navy. Merchants who were accused of violating the laws had their cases heard in the Admiralty Courts.

In 1721, Robert Walpole became the first Prime Minister of Great Britain and served as Prime Minister until 1742. During his time in office, he implemented an unwritten policy that was referred to as “wise and salutary neglect” by Edmund Burke in 1775. Essentially, Walpole eased the enforcement of trade laws throughout the British Empire so the government could focus on dealing with issues in Europe. 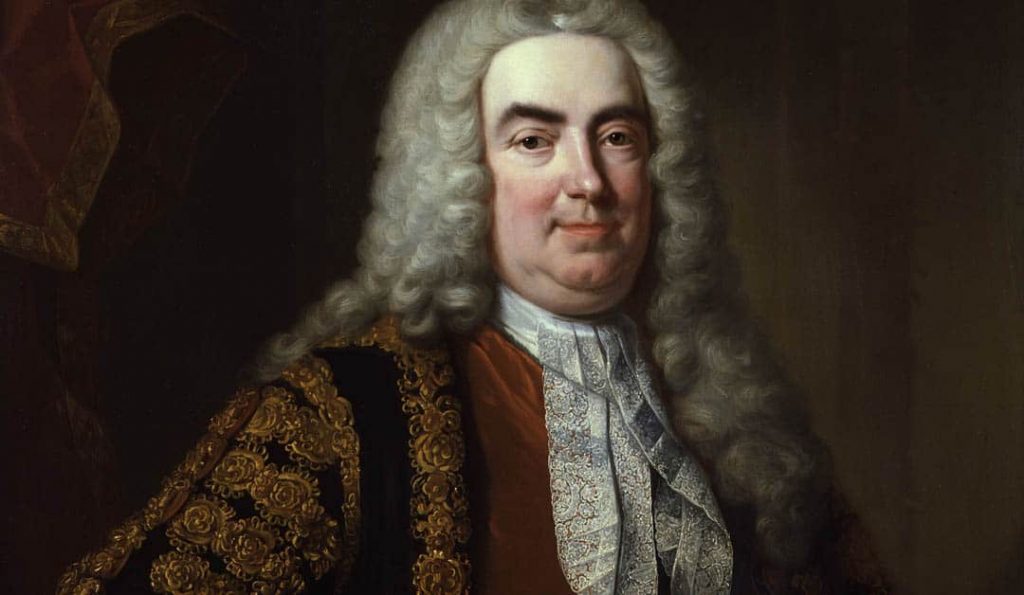 Salutary Neglect allowed merchants in the American Colonies to continue to develop trade relationships with foreign nations, independent of Britain.

Despite the lax enforcement of laws, the American Colonies were still dependent on Britain for military protection. Several European wars spilled over to North America. The major conflicts were:

At the end of the French and Indian War, Britain was forced to have a standing army in North America for the purpose of guarding the Western Frontier — or Backcountry — of the American Colonies.

Overall, the Mercantile System restricted the ability of the American Colonies to grow and expand their markets as much as they wanted to by forcing them to work within the Triangular Trade system.

In order to maximize profits, inexpensive labor was needed, and it came in the form of enslaved people and indentured servants. As the demand for raw materials increased, especially from plantations in the Southern Colonies, the need for workers also increased.

The system created benefits for southern plantation owners that they would cling to for more than another century. By 1860, the division in the nation over the use of enslaved people to provide cheap labor would become one of the major causes of the Civil War.

The immediate effects of the Mercantile System and Salutary Neglect led American merchants to ignore regulations, bribe customs officials, and engage in smuggling. After the French and Indian War ended in 1763, colonial policy shifted so new laws were used to levy taxes directly on Americans and to restrict their use of currency.

Cause of the American Revolution

Mercantilism was a cause of the American Revolution because Britain passed laws based on the Mercantile System that Americans believed violated their rights as Englishmen. Americans felt that way because the laws were passed by a governing body — Parliament — in which the colonies did not have elected representatives. 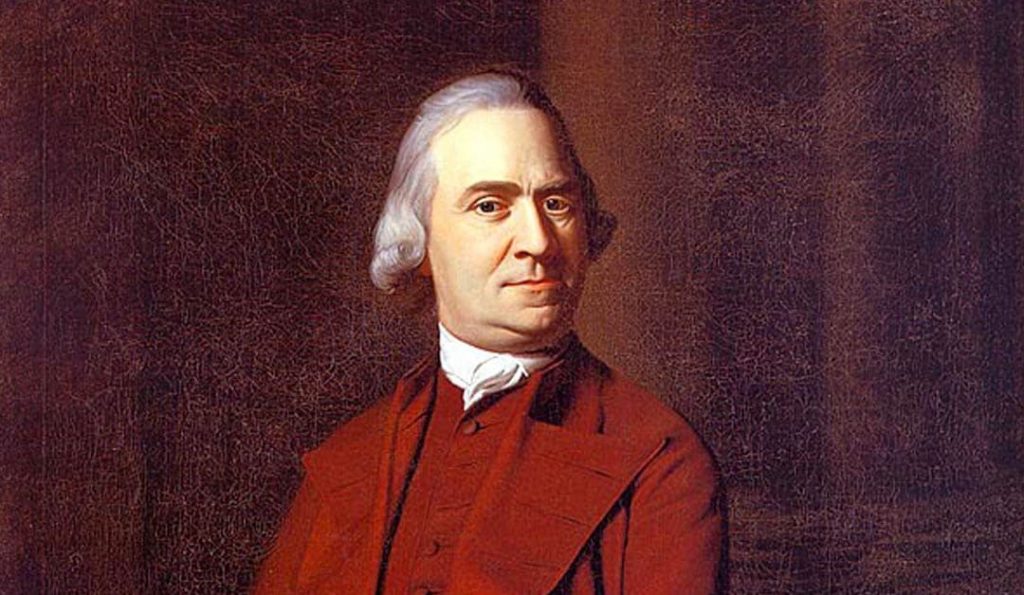 With each new law passed by Parliament, outrage over “no taxation without representation” grew, so did organized political resistance. Unfortunately, Britain never seemed to grasp what was happening, because it held on to the old ideas of Mercantilism, loyalty to the monarchy, and the authority of Parliament.

Mercantilism was significant because it was the economic system followed by Britain that led to the development of Triangular Trade, the growth of slavery in the American Colonies, and was a cause of the American Revolution.