Patrick Henry was a Founding Father, member of the Continental Congress, and five-time Governor of Virginia.

Patrick Henry was a Founding Father, member of the Continental Congress, and five-time Governor of Virginia. He is best remembered for his “give me liberty or give me death” speech in 1775, which served as an inspiration for the cause of independence. Henry continued to champion liberty after the Revolution, as a staunch Anti-Federalist and opponent to ratification of the U.S. Constitution on the grounds that it centralized too much power with the federal government. 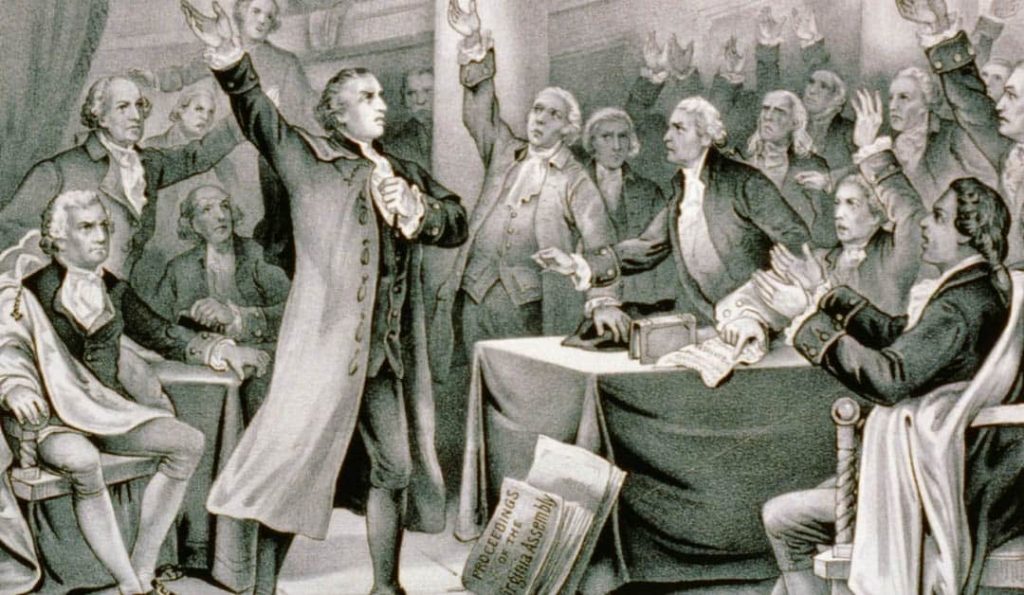 Patrick Henry was born May 29, 1736, in Studley in Hanover County, Virginia.

After failed attempts at several professions, Henry gained admission to the Virginia bar despite the fact that he had no formal legal training.

He gained notoriety in Virginia for his arguments in court in the Parsons’ Cause, where he challenged British authority to overrule legislation passed by Virginia’s colonial government.

In 1765, he was elected to the Virginia House of Burgesses, during the Stamp Act Crisis.

In May 1765, the Virginia House of Burgesses voted to endorse his Stamp Act Resolves, which attacked Parliament’s claim of authority to tax the colonies.

Henry joined other Virginians in the establishment of inter-colonial committees of correspondence in 1773.

He was elected as one of Virginia’s seven delegates to the First Continental Congress in 1774.

In a speech before Congress, Henry declared “I am not a Virginian, but an American.”

He was elected as a Virginia delegate to the Second Continental Congress in 1775.

In 1775, he organized a volunteer militia company in Hanover County.

He played an active role in the Second Virginia Convention in 1775, advocating independence from Great Britain.

During the Second Virginia Convention, he made a passionate plea for independence and ended his speech with the famous phrase, “Give me liberty or give me death.”

He was appointed commander of newly-formed Virginia Militia in 1775.

When the Virginia Militia became part of the Continental Army in 1776, he was passed over as a commander.

He helped draft Virginia’s Declaration of Rights ( a precursor to America’s Bill of Rights) in 1776.

Henry was elected as the first governor of the Commonwealth of Virginia in 1776 and served three terms until 1779.

He sent Virginia troops under George Rogers Clark to hold the Old Northwest against the British and their Indian allies in 1778.

He was elected to the Virginia House of Delegates in 1780.

Henry was selected to represent Virginia in the Constitutional Convention but declined for private reasons.

He was elected as a delegate to the Virginia ratification convention, where he argued eloquently against the proposed U.S. Constitution on the grounds that it centralized too much power in the federal government.

He was buried at Red Hill.