The Powder Alarm occurred in Cambridge, Massachusetts on September 1, 1774, and was a key event that led to the start of the Revolutionary War.

Prelude to the Powder Alarm

After the Boston Tea Party, Parliament was determined to send a strong message to revolutionaries in Massachusetts. It devised and passed a series of laws that were intended to punish the city of Boston and the colony. The laws are collectively referred to as the Coercive Acts. General Thomas Gage, the commander of British military forces in North America, was named Royal Governor of Massachusetts and given the task of enforcing the laws. 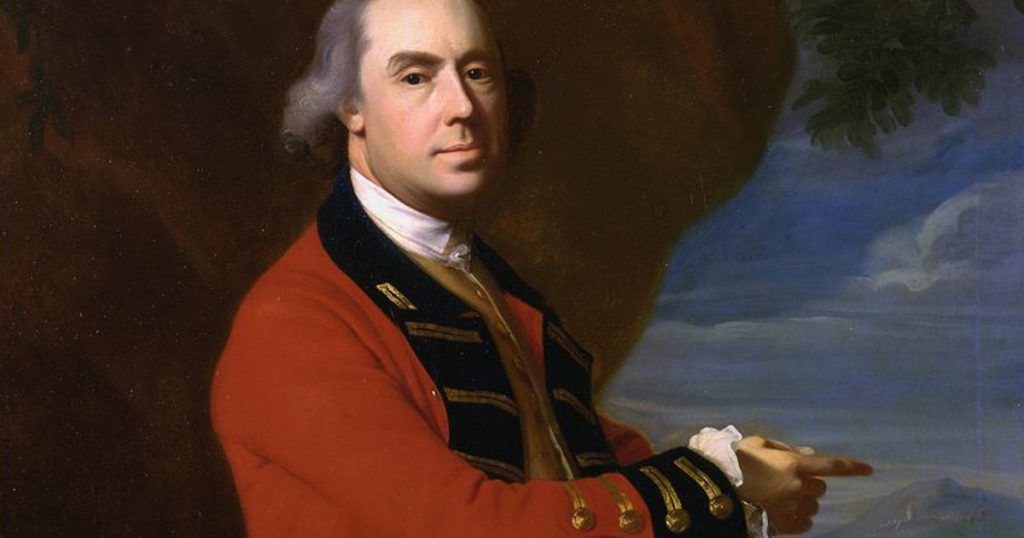 One of the Coercive Acts was the Massachusetts Government Act, which was passed on May 20, 1774. In the Act, Parliament revoked the Massachusetts Charter and stripped the General Assembly — the lower house of the legislature — of the right to elect the members of the upper house, which was known as the Council.

The Council was replaced by 36 members who were appointed by a “royal writ of mandamus” from General Gage. Therefore, they were known as the Mandamus Council or Mandamus Councillors.

Only 25 of the 36 appointees accepted their positions because they were afraid of the repercussions they might face for being seen as in league with Gage and Parliament. Many people did not believe the Mandamus Councillors were legitimate, since they were appointed and not elected.

This caused trouble for anyone that accepted a position as a Mandamus Councillor, and several of them were harassed during the course of events of the Powder Alarm.

The Towns Move Their Gunpowder

With the loss of the freedom to elect their own representatives, in their own colony, the people of Massachusetts began to plan for the worst. Many of the towns throughout the colony were in the habit of storing weapons and ammunition in storehouses throughout the colony, including the Provincial Powder House on Quarry Hill in Charlestown. Slowly, and quietly, the towns began removing their weapons and ammunition from the storehouses.

Gage did not want hostilities to break out, so he started to make his own plans to remove weapons and ammunition from the storehouses. He asked Major William Brattle for an inventory of the storehouse in Charlestown. Brattle sent a letter that indicated the towns had removed their gunpowder, and all that was left were 250 half-barrels of gunpowder that belonged to the colony.

Gage was worried the gunpowder would be stolen and later used against his men, so he decided to take action. He organized a small force to go to Charlestown to retrieve the gunpowder and move it to Castle William in Boston Harbor for safekeeping.

Early in the morning on September 1, around 250 British soldiers set sail on thirteen longboats. They made their way from the harbor up the Mystic River to Charlestown, where they disembarked and divided into two detachments.

One detachment stayed in Charlestown. It searched the town and found two small field guns that had recently been acquired by the town’s militia. The other detachment marched the final mile to the magazine and removed the powder.

Both detachments embarked on the longboats and sailed to Castle William in Boston Harbor, where they offloaded the weapons and gunpowder for storage. The entire operation was completed by noon that day. 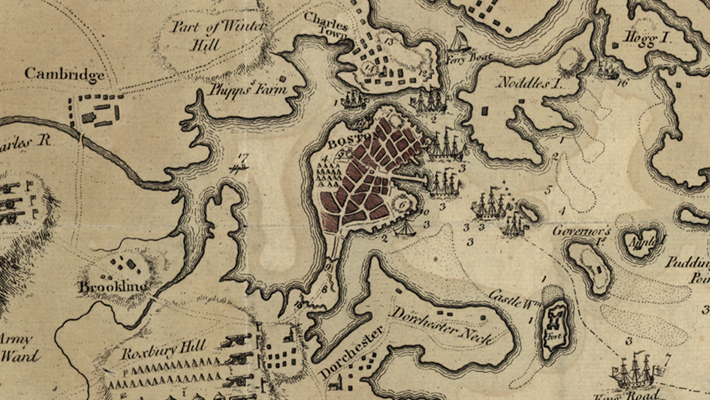 This map of Boston shows Charlestown, on the peninsula north of the city, as it was in 1775.

Rumors Spread Throughout the Colonies

News of the action spread quickly throughout Boston and made its way into the countryside. As word spread, it was embellished with rumors the British had killed six Bostonians and the Navy had opened fire on the town and leveled the seaport.

By the time the rumors reached Israel Putnam at his farm in Pomfret, Connecticut on September 3. He was told the British ships had bombarded Boston and 30,000 militia were en route to help defend the city.

The First Continental Congress held its first meeting on September 5 in Philadelphia. The news arrived there on September 6. John Adams called the news “a confused account, but an alarming one indeed.”

Throughout the afternoon and evening of September 1, around 4,000 militia from all over the countryside made their way to Charlestown. They were gathered on Cambridge Common the next morning, primarily in protest of the atrocities they heard the British had committed against the citizens of Boston and the city itself.

When the crowd learned the rumors were false, the situation calmed down. However, the crowd turned its attention towards some members of the Mandamus Council. Several were forced to resign, including Samuel Danforth, Joseph Lee, and Lieutenant Governor Thomas Oliver. Despite the threat of violence, the crowd eventually dispersed.

Aftermath of the Powder Alarm

It concerned Gage that such a large force could assemble so easily. The Powder Alarm also showed there was significant support throughout the countryside for Boston, and the militia from the outlying towns could respond quickly, and in large numbers. In response, he fortified Boston Neck, despite protests from the citizens and elected officials of Boston.

Gage wrote to London and asked for reinforcements, “if you think ten thousand men sufficient, send twenty; if one million is thought enough, give two; you save both blood and treasure in the end.” London responded by sending 400 marines to Boston under the command of Lieutenant John Pitcairn.

After the Powder Alarm, a network was set up in Boston to keep an eye on the movements of the British troops. Paul Revere played a key role in the network, which was largely made up of artisans and merchants like him.

Birth of the Massachusetts Provincial Government

On September 21, Patriot leaders met in Worcester. In a short period of time, they set up a system of communication that included express riders and alarms.

They also decided to ask the towns in Massachusetts to organize one-third of the militia into companies that could be ready at a moment’s notice to defend against British aggression. Those companies are known as the Minutemen. 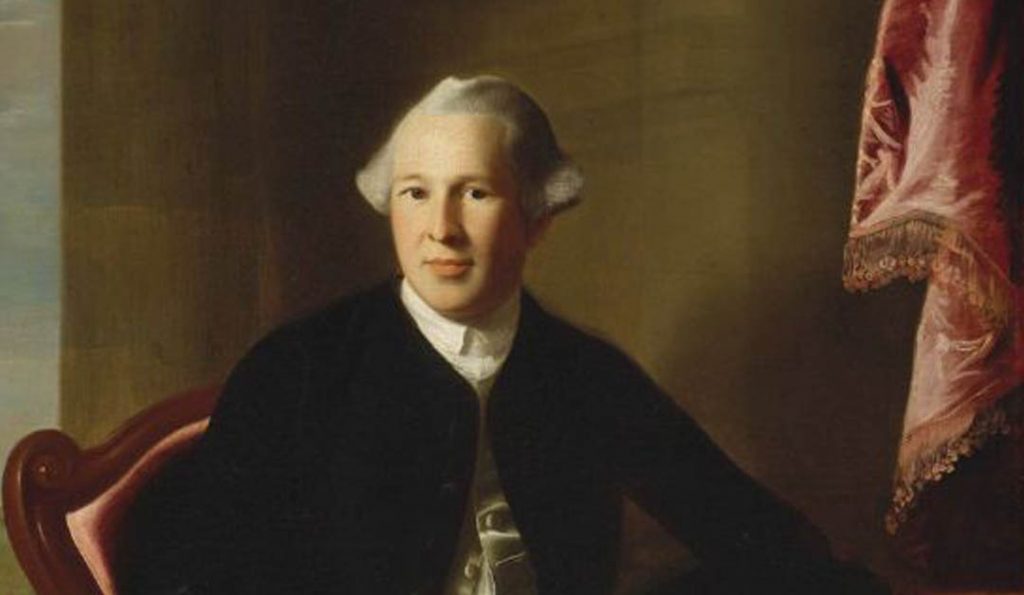 Joseph Warren was a member of the Massachusetts Provincial Congress and the Committee of Safety.

In November, the Provincial Congress voted to raise a militia of 12,000 Minutemen. Throughout the winter, militia units were raised and trained, and weapons and artillery were collected and stored in Concord and Worcester.

Unfortunately, there was a member of the Massachusetts Provincial Congress who was a spy and sent information to Gage. His name was Benjamin Church. Eventually, Church would be found out, but not before he had passed important information back to Gage, including the location of the Patriot weapons and ammunition.

Significance of the Powder Alarm

The event was significant because it showed the Patriot militia was more organized than the British thought they were. It led to the creation of a spy network in Boston and the Massachusetts Provincial Congress. Both would play a key role in events leading up to April 19, 1775, and the outbreak of the war that began at the Battle of Lexington.