The Quasi-War was an undeclared naval war between the United States and France during the Presidency of John Adams. It grew out of the XYZ Affair and ended when French politics changed direction after Napoleon came into power.

Summary of the Quasi-War with France

The Quasi-War with France was an undeclared naval war between France and the United States that took place between 1798 and 1900. It took place under the watch of President John Adams, and it was the result of political disagreements over treaties the United States had signed with France and Britain. The French started harassing American ships on the seas, so Adams sent a delegation to negotiate a treaty. Instead, the French negotiators demanded the United States pay a bribe before they would start negotiations. This scandal, known as the XYZ Affair, outraged Americans and led to the popular slogan “Millions for defense, but not one cent for tribute.” Congress responded by establishing the United States Navy on April 30, 1798. The small American fleet, under the leadership of Thomas Truxton, quickly established itself as a significant naval force by winning several key battles. While the Quasi-War raged, Napoleon came to power in France and he wanted a better relationship with the United States. The two nations negotiated at the Convention of 1800 and agreed to the Treaty of Mortefontaine, which ended the Quasi-War and restored the political and economic relationships.

The Franco-American Alliance is Established

On February 6, 1778, during the Revolutionary War, the United States and France entered into a Treaty of Alliance signed by Benjamin Franklin, the Comte de Vergennes, and others. Also known as the Franco-American Alliance, it set up a military alliance between the two nations and aided the Americans in their cause against the British. The Treaty of Alliance was actually the second treaty the two nations agreed to. The first was the Treaty of Amity and Commerce. It was significant because France recognized the United States as an independent nation, making it the first foreign country to do so. 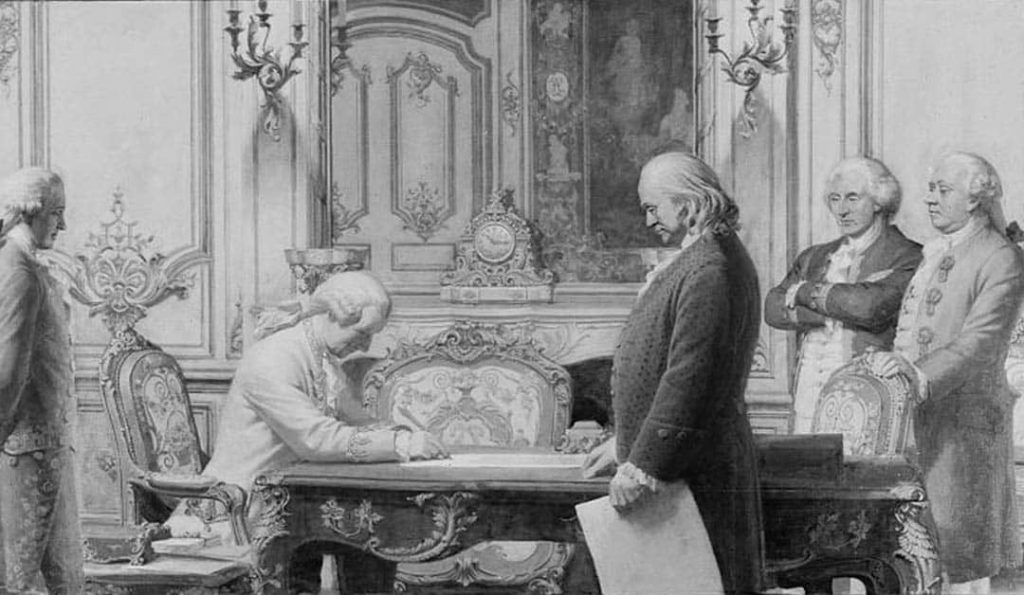 This illustration by Charles E. Mills depicts the signing of the Treaty of Amity and Commerce with France. Image Source: Library of Congress.

Tensions with France Flare Over the Jay Treaty

In 1793, a war between England and France broke out. A year later, John Jay negotiated a treaty with Great Britain that increased trade between the nations, resolved several points of contention between the United States and Britain, and averted war.

In the latter part of 1796, France responded by harassing American merchant ships. The United States had no naval force in place. After the American Revolutionary War ended, the Continental Navy had been disbanded and most of the ships had been sold.

In the early days of the United States, the government needed income and the way it tried to raise money was through tariffs — or taxes — on imports. However, merchants turned to smuggling to avoid paying tariffs — exactly what they had done in opposition to the Navigation Acts, Sugar Act, and other British policies.

Congress responded to smuggling by setting up the Revenue-Marine on August 4, 1790, which was the first version of the United States Coast Guard. The department was responsible for patrolling the coast and enforcing tariffs and other maritime laws. The Revenue-Marine consisted of 10 cutters. Cutters are small, narrow, ships with a single mast that are built for speed.

In 1793, the Barbary Pirates started attacking American merchant ships sailing across the Atlantic Ocean. Congress responded by passing the Naval Act of 1794, which was signed by President George Washington on March 27, 1794. The provisions of the act provided for the construction of six frigates. At that time, frigates were warships with guns on the decks. The American frigates were large for the time, and very powerful. Each of them had more than 36 guns and they were a formidable presence on the open seas.

The original six frigates of the United States Navy were:

The first three that were completed and put into service were:

Party Politics and the Rift Between Adams and Jefferson

On March 4, 1797, John Adams took office as President. Prior to the inauguration, Adams, a Federalist, wanted to send Vice President Thomas Jefferson, a Democrat-Republican, to negotiate with the French and end the harassment of American merchant ships. Adams decided that it would be unwise to send the Vice President, as he was next in line for the Presidency. He then settled on a plan to send two men, Elbridge Gerry and James Madison, to join the U.S. Minister to France, Charles C. Pinckney in Europe and carry on the negotiations with the French. Unfortunately, the plan met with resistance from Washington, High Federalists, and members of Adams’ cabinet. They found Madison unacceptable, but Adams told the cabinet that he would not be swayed by party politics. In response, Secretary of the Treasury Oliver Wolcott threatened to resign. Later, Jefferson informed Adams that Madison had refused the appointment. Between this and Adams’ failure, in Jefferson’s eyes, to stand up to the members of his party, a rift was created between the two Founding Fathers that would last for many years to come.

Soon after, word came that Pinckney had been rejected by the French government. He left France, afraid that he would be arrested by the French, and went to the Netherlands. He waited there for instructions from the President. Eventually, John Marshall was chosen in place of Madison to join Gerry and Pinckney.

At the end of 1797, Adams addressed Congress, and made it clear that there was a need “to place our country in a suitable posture of defense.” Then in the Spring of 1798, he told Congress about the XYZ Affair.

The XYZ Affair involved the French Foreign Minister, Charles Maurice de Talleyrand, sending agents to meet with Pinckney, Gerry, and Marshall. The agents made demands and set conditions for negotiation, including asking the Americans to pay bribes, which Pinckney flatly denied, saying “No, no, not a sixpence.” Marshall and Pinckney returned home, and the announcement of the scandal unleashed a wave of anti-French sentiment.

This led to the passage of the Alien and Sedition Acts, a controversial set of four bills that were intended to keep foreigners living in the United States from having an influence on American opinions.

Founding the United States Navy and Buildup to War

As the slogan “Millions for defense, but not one cent for tribute” became the rallying cry of the Federalists, Congress commissioned 1,000 privateers to defend against French hostilities and established the Department of the Navy on April 30, 1798.

By May, the sloop Ganges was guarding the coast between Long Island and Chesapeake and was joined the next month by the Constellation and the United States.

On July 7, 1798, Congress rescinded all treaties with France. The same day, the USS Delaware captured the French privateer La Croyable off the shores of New Jersey. It was the first victory for the new United States Navy in the Quasi-War. The Navy took the La Croyable, added it to its fleet, and renamed it the USS Retaliation.

With a fleet of about 25 ships, the U.S. Navy patrolled the coast down through the Caribbean, looking for French ships. The most famous battles involved the frigate USS Constellation, a 38-gun ship commanded by Thomas Truxton.

The first battle occurred on February 1, 1799, and involved the 36-gun French frigate L’Insurgente. The French attempted to board the Constellation, but Truxton was able to maneuver away and fire on the L’Insurgente, leading to the French surrender. It was the first victory for the U.S. Navy over an enemy warship.

This painting by Rear Admiral John William Schmidt depicts the fight between the USS Constellation, left, and the L’Insurgente on February 9, 1799. Image Source: Wikipedia.

Almost a year later, on February 2, 1800, Constellation engaged the 52-gun frigate La Vengeance. The Constellation pounded the French ship for five hours, but the French were able to escape under the cover of the night.

The Quasi-War Ends with the Treaty of Mortefontaine

On November 9, 1799, Napoleon’s coup in France marked a change in the direction of French politics and policy. Soon after, word came to President Adams from William Vans Murray and John Quincy Adams that France wanted to negotiate. The President dispatched official envoys to France. On September 30, 1800, the Treaty of Mortefontaine was signed, ending the hostilities of the undeclared war. The Treaty terminated all previous agreements and reestablished trade ties between the two nations.

Significance of the Quasi-War with France

Here are key facts and important details about the Quasi-War with France for kids doing research and students studying for the AP U.S. History (APUSH) exam.

Interesting Facts About the Quasi-War

How did the Quasi-War Lead to the Logan Act?

The Logan Act was signed by President Adams on January 30, 1799, during the Quasi-War. It was passed after George Logan, a private citizen and Democratic-Republican from Pennsylvania, went to France and met with French officials, including Talleyrand. Logan negotiated with the French but apparently made it clear he was a private citizen. Coincidentally, a few days after the meetings ended, the French took action that may give the impression Logan’s mission was successful.

Not only did the French lift the trade embargo, but they released the American seamen they had captured. The reality may actually be that Talleyrand realized the attempt to bribe the Americans during the XYZ Affair was a mistake and the French were working to repair the relationship with the United States.

Federalists were outraged and viewed Logan’s negotiations as an attempt by their political rivals to undermine them. They responded by passing the Logan Act, which made it illegal for private citizens to correspond with foreign governments for the purpose of influencing foreign affairs “in relation to any disputes or controversies with the United States, or to defeat the measures of the United States.”

Logan was not prosecuted for his actions, because the act was passed after he conducted the negotiations. In fact, he was elected by Pennsylvania as a U.S. Senator in 1800, the same year Thomas Jefferson was elected President.

Who was Thomas Truxton?

Truxton served in the merchant service for eight years before the American Revolution and was a privateersman during the War for Independence. During the war, he commanded the Independence, Mars, and St. James, all operating in British waters. He was appointed Captain in the new U.S. Navy in 1794. Truxton oversaw the construction of the Constellation, and also served as its commanding officer.