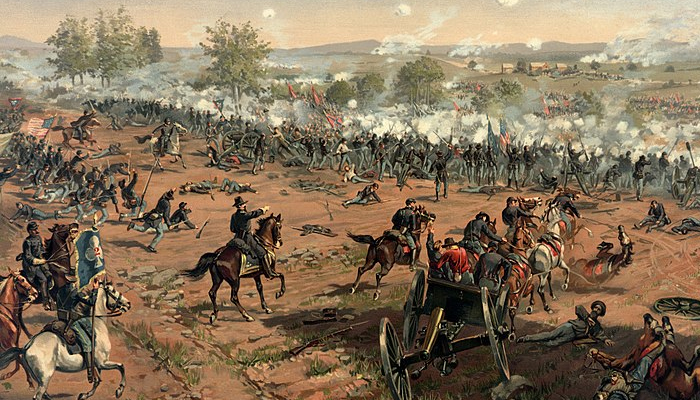 After Chancellorsville, Lee decided to invade the North. He planned to disengage Union forces near Fredericksburg and move the Army of Northern Virginia northwest across the Blue Ridge Mountains. From there, he would push northeast through the Shenandoah Valley into Maryland and Pennsylvania.

The turning point of the Civil War in the Eastern Theater came at Gettysburg on July 3, 1863. Lee ordered an ill-fated charge on Union positions on Cemetery Ridge. The Confederate charge was led by George Pickett, and the target was a small place on the ridge, which we know as The Angle, where a stone wall zigzags it’s way across the ridge. 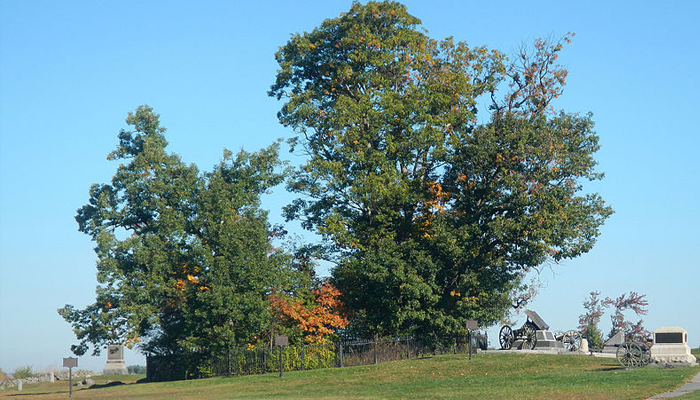 The Copse of Trees on Cemetery Ridge, Wikimedia Commons

The wall ends near a group of trees known as the Copse of Trees, and in front of that is the High Water Mark of the Confederacy. A monument stands by those trees and marks where Pickett’s Charge was turned back, with devastating results. Lee’s Army would never recover.

The Battle of Brandy Station, also known as the Battle of Fleetwood Hill, was fought June 9, 1863, in Culpeper County, Virginia. It was the largest cavalry engagement of the Civil War. The battle served as a morale booster for the battered Army of the Potomac by demonstrating the Union cavalry was beginning to emerge as a worthy opponent for their formerly, far-superior Confederate counterpart, led by J.E.B. Stuart.

The Confederate victory at the Battle of Winchester II (June 13 – June 15, 1863) cleared the upper Shenandoah Valley of Union resistance, paving the way for Robert E. Lee’s invasion of Maryland and Pennsylvania. Confederate Lieutenant General Richard Ewell’s victory at enhanced his reputation in his first test as a corps commander following the death of Thomas “Stonewall” Jackson at the Battle of Chancellorsville.

The Battle of Aldie was inconclusive. At the end of the day, Union Major General Alfred Pleasonton’s Cavalry Corps held the junction of Ashby’s Gap Turnpike and Snickersville Turnpike, but he had gained no significant information about Lee’s movements on the west side of the mountains. The battle cost the Union 305 dead and wounded compared to roughly 120 Confederate casualties. Particularly hard hit was the 1st Massachusetts Cavalry. Of the 294 troopers from that unit, 198 were killed or wounded.

Confederate forces led by J.E.B. Stuart were able to take a strong defensive position at Ashby Gap, which helped keep Union forces from learning about the movements of General Lee’s Army of Northern Virginia.

The Battle of Hanover delayed J.E.B. Stuart and his cavalry, and they arrived late to Gettysburg during the second day of the battle.

Often referred to as the turning point in the American Civil War, the Battle of Gettysburg was fought in and around the town of Gettysburg, Pennsylvania, from July 1 to July 3, 1863. 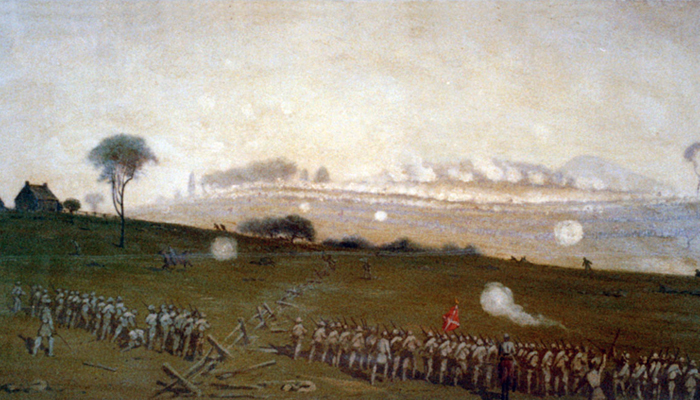 Confederate forces led by J.E.B. Stuart were able to delay Union forces at The Battle of Boonsboro, allowing more time for the Army of Virginia to escape.

The Battle of Manassas, also known as the Battle of Wapping Heights, was fought on July 23, 1863, in Warren County, Virginia. It was the last engagement of the Gettysburg Campaign.