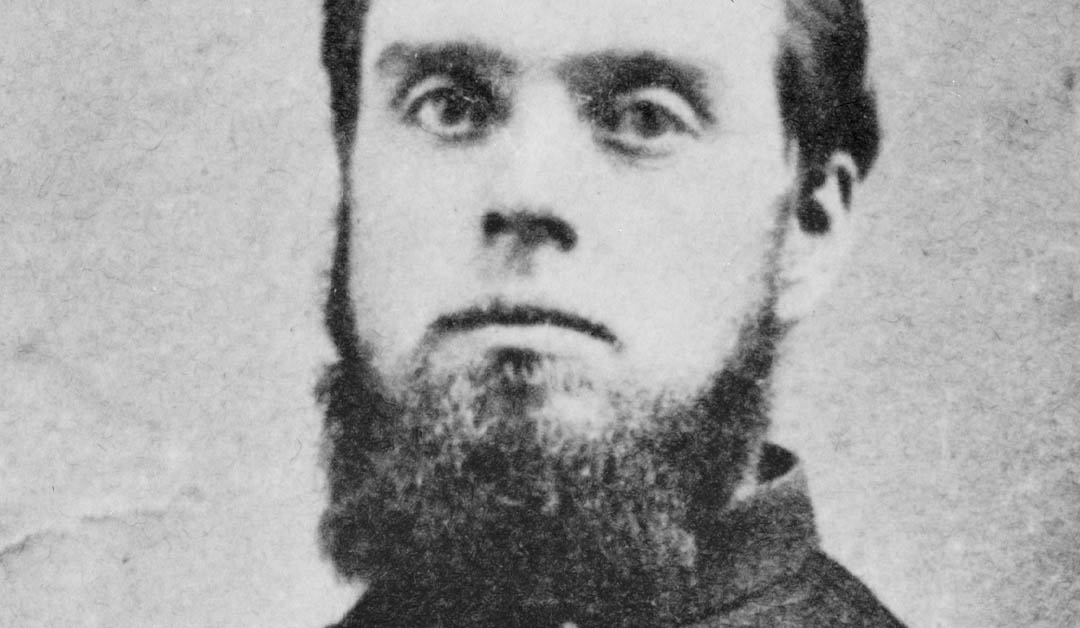 There is some news today — October 19, 2022 — that is relevant to our coverage of the American Civil War here at American History Central. Yesterday, Georgia Representative Marjorie Taylor Greene visited the Chickamauga & Chattanooga National Military Park. The Chickamauga Battlefield is where, in September 1863, Confederate forces defeated Union forces. The battle is significant because it was the largest Confederate victory in the Western Theater of the war, and the Union suffered around 16,000 casualties.

Greene is not in the news for visiting the battlefield, but for what she said about her visit to the Wilder Brigade Memorial. She posted a few pictures on Twitter (follow AHC here) and apparently identified the men of the Wilder Brigade as Confederate soldiers. Of course, many news outlets and social media channels are criticizing her for incorrectly spelling “Chickamauga” and referring to Union soldiers as Confederates.

But how many people actually know about John T. Wilder, his “Lighting Brigade,” and the adoption of the Spencer Repeating Rifle other than Civil War buffs?

Well, let’s take a moment — while Wilder and his men are in the spotlight — to take a look.

Who was John T. Wilder?

Wilder was born in New York in 1830 and moved to Indiana in 1857. When the Civil War began, he was commissioned as captain of an infantry regiment on May 3, 1861. On June 4, he was promoted to lieutenant colonel. Wilder saw his first action during the Battle of Cheat Mountain. Later, he was captured Battle of Munfordville and spent two months as a prisoner of war before being exchanged. When he returned to action, he was a brigade commander with the Army of the Cumberland.

William S. Rosecrans and the Army of the Cumberland

On October 24, 1862, the U.S. War Department issued General Orders, No. 168 announcing the creation of the Department of the Cumberland “by direction of the President.” The order placed Major General William S. Rosecrans in command of the new department and its troops, designated the Fourteenth Army Corps, which was also known as the Army of the Cumberland.

On December 26, Rosecrans moved out of Nashville with roughly 44,000 men, prepared to engage Confederate General Bragg and his Army of Tennessee. Bragg and about 38,000 soldiers were encamped at Murfreesboro, Tennessee. The two armies fought from December 31, 1862, through January 2, 1863, at the Battle of Stones River (also known as the Battle of Murfreesboro). Following the hard-fought Union victory, Bragg withdrew to Tullahoma, Tennessee.

As Rosecrans planned his pursuit of the Rebel army, Confederate cavalry commanded by General John Hunt Morgan harassed the Union rear and threatened their supply lines. Desperate to stop Morgan’s raids, Rosecrans wrote to General-in-Chief Henry W. Halleck on January 14, 1863, and asked for cavalry or mounted infantry to help fight Morgan. However, the War Department was unable to give Rosecrans the horses he needed and he decided to take action. On February 16, 1863, he issued an order that authorized the Second Brigade — Wilder and his men — to act as a mounted brigade. They still needed horses, so Rosecrans and Wilder had them confiscated from “loyal Rebel citizens” from the surrounding Tennessee counties. By mid-April, the entire brigade was mounted. The regiments in Wilder’s Brigade were:

Wilder and the Spencer Rifle

Even though they traveled on horses, Wilder and his men still saw themselves as infantrymen instead of cavalrymen. Regardless, many of them had to learn to ride and they all had to care for their mounts. Wilder’s men used their mounts to deploy more quickly than traditional infantrymen who traveled by foot. Upon encountering their enemy, they dismounted and employed infantry tactics. Wilder also outfitted his men with a new, more deadly weapon — the Spencer Repeating Rifle.

Wilder initially ordered Henry Rifles, which were similar to the Spencer Rifles. However, the manufacturer was not able to fill the order and Wilder started looking for alternatives. Around that time, Christopher Spencer visited the headquarters of General Rosecrans so he could demonstrate his new rifle to him.

Wilder was so impressed by Spencer’s rifle that he canvassed his men and they agreed to adopt the new weapon. Unfortunately, army officials were unwilling to purchase repeating rifles because of concerns about soldiers wasting ammunition. Refusing to be denied the new weapon, Wilder bypassed the War Department and personally ordered enough rifles from Spencer to arm his brigade. To pay for the weapons, Wilder mortgaged his business and home to secure a bank loan, and each of his men co-signed promissory notes to cover the price of their individual rifles. Later in the year, after the rifles proved highly effective, the army reversed its position and covered the cost.

The Lightning Brigade is Born at Hoover’s Gap

The two armies did not meet again until June when Rosecrans moved toward Tullahoma, Tennessee. Bragg’s forces were encamped there, about twenty-six miles southeast of Rosecrans’s winter quarters at Murfreesboro, Tennessee.

On June 24, Rosecrans ordered Major General George H. Thomas and his 14th Corps to strike the mountain gaps in the middle of Bragg’s line. Thomas tasked Wilder with leading the initial assault on Hoover’s Gap, a four-mile-long pass through a range of hills that run westward from the Cumberland mountains.

On the morning of the 24th, during a steady rain that continued throughout the day, Wilder’s mounted infantry moved toward Hoover’s Gap ahead of Thomas’s main force. Around noon, Wilder and his men engaged the lone Confederate force defending the pass through the mountains. Advancing farther than expected, Wilder’s 1,500 soldiers quickly dislodged the surprised Rebels and took possession of the gap. Wilder then ordered his men to prepare for a counterattack.

Three separate counterattacks during the afternoon proved unsuccessful. The Confederate rifles — breechloaders — were no match for the firepower of the Wilder’s Spencer Rifles. By the time Confederate reinforcements arrived, Thomas’s 14th Corps arrived, and the Battle of Hoover’s Gap ended around 7 p.m.

When Thomas met with Wilder, he said “You have saved the lives of a thousand men by your gallant conduct today. I didn’t expect to get this Gap for three days.” Thomas christened Wilder’s command as the “Lightning Brigade.”

By September 1, the Army of the Cumberland had crossed the Tennessee River with no resistance. Realizing that his army was once again in peril, Bragg abandoned Chattanooga on September 9, 1863, marching his soldiers into northern Georgia. Rosecrans captured Chattanooga, but rather than regrouping and securing the city as he had done at Murfreesboro, he pursued Bragg into Georgia, which set up a showdown at Chickamauga.

The Lightning Brigade at the Battle of Chickamauga

During the second week of September, Wilder’s brigade probed Confederate lines in northern Georgia and skirmished with Rebel cavalry near Ringgold, Georgia.

September 17 — Rosecrans ordered Wilder’s Lightning Brigade and Colonel Robert Minty’s cavalry brigade to hold back over 8,000 advancing Confederates as they attempted to cross West Chickamauga Creek. For over five hours, the two Union brigades held back the surging Confederates before they forced their way across the creek. Wilder’s men fell back three miles and formed a defensive line. Armed with their Spencer Repeating Rifles, the Lightning Brigade halted two furious onslaughts from a much larger force before the Confederates abandoned their advance around 10 p.m.

During the remainder of the Battle of Chickamauga, the Lightning Brigade was held in reserve and deployed to various hot spots to thwart Confederate advances and enable the Army of the Cumberland to retreat to Chattanooga in an orderly fashion.

September 18 — The Confederates assaulted several crossing points on Chickamauga Creek that Federal troops held. Union resistance was fierce, and although the Confederates eventually crossed the creek, they did not do so in time to launch a full-scale attack that day.

September 19 — The main battle began on September 19 when Bragg ordered a major assault on the Union left. By the middle of the day, heavy fighting erupted between the middle of both lines. Despite repeated attacks from the Confederates, the Union troops held their positions throughout the day. That night, they pulled back and constructed log breastworks along a new line.

September 20 — On September 20, Bragg renewed the attack. In the late morning, Rosecrans mistakenly believed that the Confederates had created a gap on his left flank. He responded by sending reinforcements from his center — inadvertently creating a real gap in the line. General James Longstreet immediately exploited the gap and drove one-third of the Union army, including Rosecrans, from the field. General George H. Thomas took command of the remaining army and withstood Confederate assaults until nightfall and then retreated to the safety of the mountains.

September 21 — The Army of the Cumberland withdrew to Chattanooga and took up positions in the defensive works previously constructed by Bragg’s army. Bragg responded by seizing the high ground overlooking Chattanooga (Lookout Mountain, Missionary Ridge, and Raccoon Mountain) and laid siege to the city.

The Fate of Wilder’s Brigade

Following the victory at the Battle of Chickamauga, Bragg bottled up Rosecrans’ forces within Chattanooga, severed his supply lines, and began shelling the Union positions. Union officials responded to the siege by sending 15,000 troops commanded by Major General Joseph Hooker and 20,000 troops commanded by Major General William T. Sherman to Chattanooga. More significantly, on October 16, 1863, the War Department issued General Orders, No. 337 creating the Military Division of the Mississippi, and placing Ulysses S. Grant in charge of all Union armies in the western theater. Grant quickly relieved Rosecrans of his command and placed Major General George Thomas in charge of the Army of the Cumberland. When Grant arrived at Chattanooga on October 23, he reorganized the Union forces there, including Wilder’s Brigade.

The reordering led to the dissolution of the Lightning Brigade. Wilder was later brevetted to brigadier general and served during the Atlanta Campaign, but recurring bouts of illness forced his retirement from the military on October 5, 1864.

In 1899, a monument to the Wilder Brigade was erected at Chickamauga. Wilder himself attended the ceremony, along with many veterans of the battle and the war. Construction on the monument was completed in 1914. From the top, the tower offers a bird’s eye view of most of the battlefield.

The Bloody Battle of Chickamauga