The Appomattox Campaign was the final campaign of the Army of Northern Virginia during the American Civil War. It consisted of a series of engagements during late March and early April 1865 that led to the General Robert E. Lee's surrender at Appomattox Court House, Virginia on April 9 and the official disbandment of the Army of Northern Virginia on April 12.

Prelude to the Appomattox Campaign

Grant in Charge of Federal Armies

On March 12, 1864, President Abraham Lincoln appointed Ulysses S. Grant as General-in-Chief of the Armies of the United States. Upon his arrival in Washington, Grant drafted a plan to get the various Union armies in the field to act in concert and strike the Confederacy from several directions: Grant would travel with Major General George Meade and his Army of the Potomac in pursuit of General Robert E. Lee and the Army of Northern Virginia in the Richmond area; Major General William T. Sherman would march three Federal armies south from Chattanooga to capture Atlanta; and Major General Franz Sigel would invade Western Virginia’s Shenandoah Valley to cut off supplies to Lee’s army and to prevent any Confederate attempts to attack Meade’s flank.

The Union Army of the Potomac relentlessly engaged the Confederate Army of Northern Virginia throughout the spring of 1864. By June, Grant forced Lee to retreat to the Richmond-Petersburg area. Thereafter, both armies were entrenched, and a stalemate ensued for the next ten months. During that period, Grant probed Lee’s defenses, but to no avail. Despite being well-entrenched, the Confederate situation grew progressively worse as their supplies dwindled. By the spring of 1865, Lee knew that when the weather allowed, his army must escape the Union stranglehold to avoid being starved into submission.

On March 25, 1865, Lee made one final attempt to break the Siege of Petersburg by ordering forces commanded by Major General John B. Gordon to attack Fort Stedman, a Union fortification in the siege lines surrounding Petersburg. Gordon’s pre-dawn attack was successful initially, but blistering Union counterattacks forced the Rebels back inside their lines. Some historians consider the Battle of Fort Stedman as the end of the Petersburg Campaign. Others think of it as the beginning of the Appomattox Campaign.

“My God, Has the Army Dissolved?”

Encouraged by the Federal victory at Five Forks, Grant ordered a general assault on the Confederate entrenchments the next day. The Union onslaught at the Third Battle of Petersburg forced Lee to abandon his entrenchments around Petersburg, which led to the fall of the Confederate Capital at Richmond. Three minor engagements took place during the next three days at Sutherland’s Station, Namozine Church, and Amelia Springs. On April 6, the Federals scored a major victory at the Battle of Sailor’s Creek (also known as the battle of Sayler’s Creek). There, Sheridan and elements of the 2nd and 6th Corps cut off Lee’s retreat forcing the surrender of nearly one-fourth of the Confederate army. The battle led Lee to exclaim, “My God, has the army dissolved?” Minor engagements continued for the next three days at Rice’s Station (April 6), High Bridge (April 6-7), and Cumberland Church (April 7) as Grant continued his dogged pursuit.

Grant Proposes a Cessation of Hostilities

On April 7, Grant started communications with Lee regarding the cessation of hostilities.  Grant informed Lee that because he considered Lee’s situation to be hopeless, he felt it was his “duty to shift from myself the responsibility of any further effusion of blood by asking of you the surrender of that portion of the Confederate States army known as the Army of Northern Virginia.”

That night, Lee responded to Grant, disputing the Union general’s assessment regarding the “hopelessness of further resistance on the part of  the Army of Northern Virginia.” Nevertheless, Lee inquired about “the terms you will offer on condition of its surrender.” The next morning, April 8, Grant generously replied, “there is but one condition I would insist upon,—namely that the men and officers surrendered shall be disqualified for taking up arms against the Government of the United States until properly exchanged.” He once again invited Lee to meet with him to discuss the surrender of Lee’s army.

As Lee was pondering Grant’s proposal, Major General George Custer and his cavalry seized a Rebel supply train at Appomattox Station, denying Lee’s army of vital provisions. Custer also captured Lee’s lead artillery unit and secured the high ground west of Appomattox Court House, directly in Lee’s line of retreat. Although Lee’s situation had deteriorated during the day, that night he stated in his response to Grant’s morning proposal, “I do not think the emergency has arisen to call for the surrender of this army. . .” Lee suggested that the two generals meet to discuss terms of peace between the North and South.

Early the next morning, Grant declined Lee’s request, noting that he “had not authority to treat on the subject of peace.” The same morning, April 9, Lee made a last desperate attempt to escape Grant’s enclosing forces. He ordered Gordon’s 2nd Corps to attack Sheridan’s Cavalry early in the morning to open an escape route for the Confederate army. Sheridan deployed the Union cavalry along the ridge that Custer had secured the day before. Gordon’s troops successfully penetrated the Federal cavalry and seized the ridge. To his dismay, however, Gordon discovered that on the other side of the ridge he faced the entire Union 5th and 24th infantry corps, formed for battle. Gordon had no alternative other than to withdraw. Meanwhile, to the north of Appomattox Court House, the Federal 2nd Corps was closing in on Major General James Longstreet and the 1st Corps.

Lee Agrees to Meet with Grant

Realizing that his army was trapped, Lee contacted Grant to arrange a meeting “with reference to the surrender of this army.” Upon receiving Lee’s request, Grant dismounted his horse and wrote a note at 11:50 a.m. informing Lee that he would “push forward to the front for the purpose of meeting you.”

Grant arranged for the meeting to take place that afternoon at the home of Wilmer McLean at Appomattox Court House. Lee arrived first and Grant followed soon thereafter. By 4 o’clock the two generals had negotiated the terms of surrender and the Appomattox Campaign ended. On April 10 Lee delivered a farewell address to his army and on April 12 the two sides formally concluded the surrender. 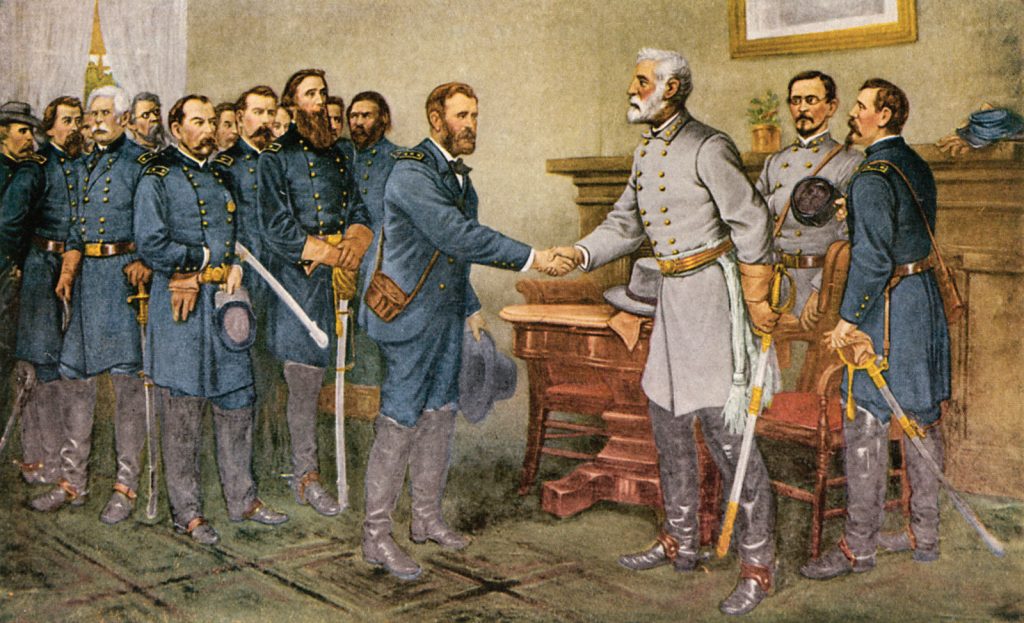 Lee’s surrender did not end the Civil War, as is oftentimes erroneously reported. Hostilities continued in various parts of the South for several months. The Confederate government met for the last time on May 5, 1865, before being dissolved. Union troops captured Confederate President Jefferson Davis on May 10 in Richmond, Virginia. Finally, on August 20, 1866, over one year later, President Andrew Johnson signed a Proclamation—Declaring that Peace, Order, Tranquillity [sic], and Civil Authority Now Exists in and Throughout the Whole of the United States of America.